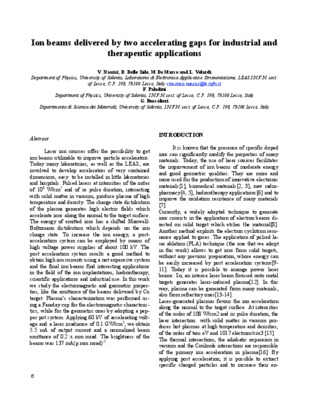 Laser ion sources offer the possibility to get ion beams utilizable to improve particle accelerators. Today many laboratories, as well as the LEAS, are involved to develop accelerators of very contained dimensions, easy to be installed in little laboratories and hospitals. Pulsed lasers at intensities of the order of 108 W/cm2 and of ns pulse duration, interacting with solid matter in vacuum, produce plasma of high temperature and density. The charge state distribution of the plasma generates high electric fields which accelerate ions along the normal to the target surface. The energy of emitted ions has a shifted Maxwell-Boltzmann distribution which depends on the ion charge state. To increase the ion energy, a post-acceleration system can be employed by means of high voltage power supplies of about 100 kV. The post acceleration system results a good method to obtain high ion currents using a not expensive system and the final ion beams find interesting applications in the field of the ion implantations, hadrontherapy, scientific applications and industrial use. In this work we study the electromagnetic and geometric proper-ties, like the emittance of the beams delivered by Cu target. Plasma‟s characterization was performed us-ing a Faraday cup for the electromagnetic characteris-tics, while for the geometric ones by adopting a pep-per pot system. Applying 60 kV of accelerating volt-age and a laser irradiance of 0.1 GW/cm2, we obtain 5.5 mA of output current and a normalized beam emittance of 0.2 π mm mrad. The brightness of the beams was 137 mA(p mm mrad)-2