The difference in sex between the author, the narrator, and the characters and their interconnection (the difference in sex of the reader could be included as well) is a fascinating topic, but one that is difficult to pursue. In an attempt to offer an approach this subject, this presentation will look at Dazai Osamu’s female monologue novels. Dazai, from the start of his creative career, devoted himself to meta-fiction and similar narrative styles, but from the 1930s to the 40s during the Asian-Pacific War, he focused on writing novels narrated by women. “Joseito” and the post-war work “Shayo” are supposed to be taking “quotes” from the already existing diaries of women, but these “quotes” are almost indistinguishable from “theft”. Rather than simply looking at similarities in expression as “theft”, I would like to focus on what kind of moral problems arise from a male author borrowing (stealing) the voice of a female narrator and the differences that arise due to differences in expression. The special period relevance and connectedness between the war and post-war periods, and if possible comparisons with Uno Chiyo and other female writers of narrative works at that time, will also be looked at 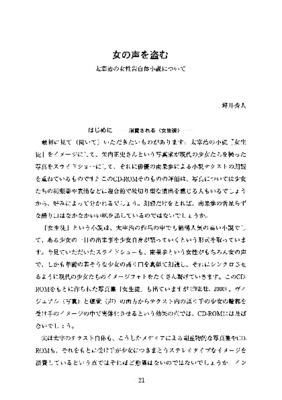