In the mid Heian era, many Japanese monks sailed across the sea to Song. Of the monks, not small was the number of monks who died in Song without returning to their own country again. People in Song drew the monks\u27 portraits and wrote poems to glorify them because they respected the monks.San Tendai Godaisan-ki, the travels written by a monk Jôjin, who sailed to Song, proves it. The diary says not only about the portrait of Jakushô and poems for him, but also about ones of Gentô and Jôjin himself.Jôjin happened to know that there was the portrait of his superior, Jakushô in Pumen-yuan during his journey and paid a visit. Jakushô\u27s portrait was enshrined in the temple and it had the poem written by the former president, Fayin-Dashi on it, which moved Jôjin so much that he wrote down the poem in his diary.While Jôjin was staying at Chuanfa-yuan, the facility for translation of Sutra in the Song era, two pieces of his portrait were painted by Song painters. One was possessed by Zhao-Dashi and it is said that he admired it everyday. The other was sent to Japan, which Jôjin had left to the group of five apprentices to him when they returned to Japan after the pilgrimage to Tiantai-shan and Wutai-shan. The praising poem dedicated by Wenhui-Dashi was written on the picture as well.These pictures and poems are the precious and historic material not only to learn about Song dynasty but also to prove the cultural exchanges between Song and Japan. They should be focused in terms of the field of literature as well. In this report based on San Tendai Godaisan-ki, I would like to examine the relationships between the pictures and poems and the contents of the poems, emphasizing the ones of Jakushô and Jôjin. I also would like to touch on the birth of the Jôjin\u27s and its introduction 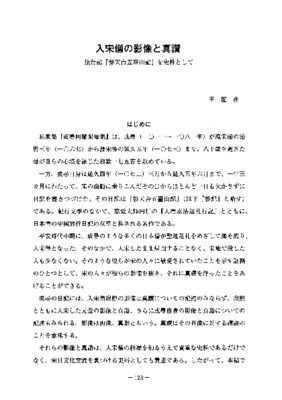