[Abstract]Water quality in Australia’s northern grains farming areas often exceeds water quality trigger values for suspended sediments, nutrients and some herbicides (CBWC, 1999). While there are many land uses in these areas that contribute to the resultant water quality, of particular concern for the grains farming industry is the widespread detection in rivers of chemicals used by their industry, namely atrazine and metolachlor. A comparison of Hodgson Creek catchment (South East Queensland, Australia) herbicide data with national water quality guidelines shows that trigger values are frequently exceeded. That water quality trigger values are exceeded is expected for a highly modified catchment such as Hodgson Creek, and the Australian New Zealand Environment and Conservation Council (ANZECC) (2000) guidelines make provision that in such catchments, locally derived targets should be set. Natural resource managers therefore require skills in linking planned management with their ability to set or meet targets. The opportunity suggested itself for using catchment modelling to set realistic targets for water quality based on the adoption of best management farming practices. This study investigated the suitability of the Soil and Water Assessment Tool (SWAT) to fulfil this modelling role in an Australian context of land use management. To test the suitability of SWAT to fulfil this role, the study aimed to determine the feasibility of using the model to explicitly depict farm management practices at a paddock scale to estimate resultant catchment water quality outcomes. SWAT operates as two distinct sub-models. A hydrologic response unit (HRU) (the paddock scale model) generates runoff and constituents, and the output of many HRU are summed and routed through a stream network. The method for calibration of SWAT proposed in the user manual (Neitsch et al., 2001) is to calibrate against streamflow before calibrating sediment and then herbicides. The logic of testing in a process dependent order is sensible, however the method proposed by Neitsch et al. (2001) assumes that the HRU processes are reliable and calibration only need consider catchment scale processes. A review of the literature suggested that there had been limited testing of HRU process in studies where SWAT had been applied. Data available for model testing came from both paddock and catchment studies. The effects of cultivation management practices on runoff and erosion have been well characterised for the study area by Freebairn and Wockner (1996). Atrazine dissipation in soil and loss in runoff was available from a study of a commercial farm in the Hodgson Creek catchment (Rattray et al, 2007). An ambient and event based water quality monitoring for suspended sediments and herbicides provided data for the Hodgson Creek catchment for the period 1999 to 2004 (Rattray, unpublished data). The model required minimal calibration to achieve good predictions of crop yields and surface cover for winter crops. However, testing of summer cropping component revealed structural problems in SWAT associated with the end of a calendar year. Testing also revealed that perennial pastures and trees are modelled with unrealistic fluctuations in biomass and leaf area index. The model was able to represent hydrology well across a range of scales (1-50,000 ha). Catchment scale runoff data was well matched for a range of tillage treatments. The model was found to be able to attain a good prediction of monthly runoff at the catchment scale. This is consistent with the finding of most other SWAT studies. The model was able to represent average annual erosion reasonably well using the Universal Soil Loss Equation (USLE) when tested at the HRU scale (1 ha) against a range of tillage management data. When tested at the catchment scale the model was found to be able to match average annual sediment loads for the catchment however annual variability in sediment loads was poorly matched. Testing of the herbicide model for SWAT found that model compared poorly with paddock scale trial data. The reason for poor model performance can be attributed to an inadequate representation of processes and model output was unrealistic compared to our understanding of herbicide transport processes. When the model was tested at a catchment scale it was found to compare very poorly with catchment scale observations. This can be explained in part by the deficiencies of the HRU herbicide model, but is also due in part to difficulties in parameterisation of spatial and temporal inputs at the catchment scale. While SWAT provides a model with detailed physical processes, the capacity to apply the model is let down by an ability to practically determine the spatial and temporal extent of the farming practices (i.e. where and when are tillage and herbicides applied in the catchment). The challenge to applying SWAT is that farming practices in Australia vary markedly from year to year. SWAT requires the user to input crop practices in as a fixed rotation while Australia’s highly variable climate with unreliable seasonal weather patterns results in opportunistic farming practices. Hence this is a major limitation in the models ability to predict catchment outcomes, particularly for herbicides where off site losses are highly dependant on application timing. In attempting to validate herbicide losses at the whole of catchment scale it became apparent that uncertainty in the temporal variation of farm operations within the catchment poses a major limitation to accurately reproducing observations at the catchment outlet. It is concluded that that there is limited usefulness of SWAT for investigating the impacts of land management on catchment scale herbicide transport for Australian conditions 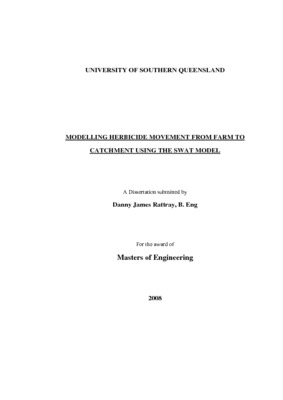 This paper was published in University of Southern Queensland ePrints.