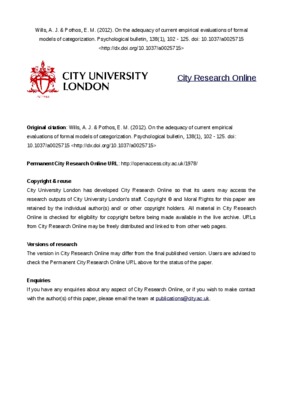 Categorization is one of the fundamental building blocks of cognition, and the study of categorization is notable for the extent to which formal modeling has been a central and influential component of research. However, the field has seen a proliferation of noncomplementary models with little consensus on the relative adequacy of these accounts. Progress in assessing the relative adequacy of formal categorization models has, to date, been limited because (a) formal model comparisons are narrow in the number of models and phenomena considered and (b) models do not often clearly define their explanatory scope. Progress is further hampered by the practice of fitting models with arbitrarily variable parameters to each data set independently. Reviewing examples of good practice in the literature, we conclude that model comparisons are most fruitful when relative adequacy is assessed by comparing well-defined models on the basis of the number and proportion of irreversible, ordinal, penetrable successes (principles of minimal flexibility, breadth, good-enough precision, maximal simplicity, and psychological focus)