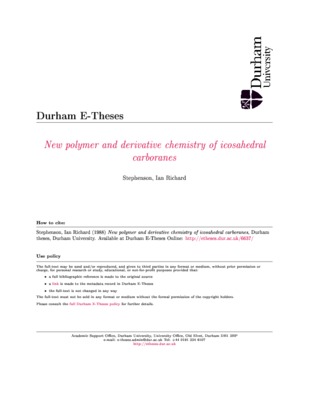 This thesis describes research carried out to establish routes to, and syntheses and characterisation of aromatic poly(etherketones), with icosahedral carboranes (C(_2)B(_1)(_0)H(_1)(_2)) incorporated into the polymer backbone (poly(carboranyletherketones)). Several sidelines which have stemmed from this work are also described. A brief literature review and discussion of project objectives introduces the work. The mechanism of formation and the general characterisation of icosahedral carboranes is then discussed along with a description of various syntheses of C-carborane derivatives. Chapter 3 describes a series of model reactions performed to test the feasibility of the various routes available for the preparation of poly(carboranyletherketones). Electrophilic polyacylation in superacid solution was found to be the most convenient method. Hence monomers (suitably substituted derivatives of 1,2-diphenyl-ortho-carborane) were prepared for polymer synthesis Under these conditions. Chapter 4 outlines the preparation and characterisation of four poly(carboranyletherketones). These polymers are shown by NMR to have the expected structures. Their solution and calorimetric characteristics show the polymers to be totally amorphous, with the polymer chains being stiffened by the presence of the 1, 2-diphenyl- ortho-carborane unit. The thermal % weight loss from these polymers both in air and in nitrogen is substantially less than that shown by parent poly (etherketones).Various C-hydroxy carboranes (R(0H)C2BiqHi0) and their trialkylammonium salts have been prepared and used to examine the effects of electron delocalisation into the carborane cage. Evidence for this originally provided by I.R. data is backed up by the molecular structure of the proton sponge salt Ph(0)C(_2)B(_14)H(_10) – C(_14)H(_19)N(_2)+. This structure shows novel cage distortions which are rationalised by frontier orbital considerations. Attempts to monitor electron delocalisation into the cage using 11B NMR, have led to a detailed NMR study of a series of carborane derivatives. As a result, various substituent effects have been highlighted. These effects have been qualitatively related to the change in polarity of the cage, using MOBI calculations to estimate changes in charge distribution throughout the cage. Finally, Appendix A summarises some additional studies, carried out to determine the ways lithium interacts with boron hydride anions BH(_4)- and B(_1-)H(_10)(^2)-