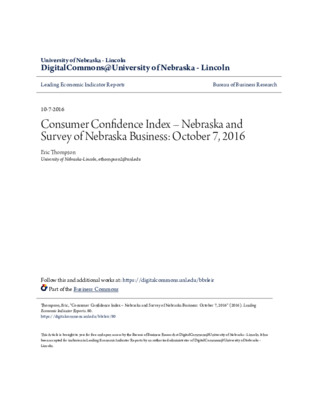 During September, a gap re-emerged between business and consumer confidence in Nebraska. The Consumer Confidence Index – Nebraska (CCI-N) fell to 87.9 during September, from a value of 97.4 in August. A value of 87.9 is well below the neutral value of 100, and indicates weak consumer confidence in Nebraska. By contrast, Nebraska businesses were optimistic, with respondents to the September 2016 Survey of Nebraska Business reporting plans to expand sales and employment. Thirty-one percent of businesses expect sales to rise over the next 6 months, while just 19 percent expect sales to fall. Thirteen percent of businesses expect to increase employment over the next 6 months while just 3 percent plan to reduce it. When asked about the most important issue facing their business, customer demand was mentioned most frequently, followed by the availability and quality of labor, competitive conditions and regulations. Households reported a variety of financial concerns with 52 percent reporting that their primary financial concerns relate to the cost of living including health care costs, taxes, major expenses (furniture, appliances, automobiles or college tuition) and the general cost of living