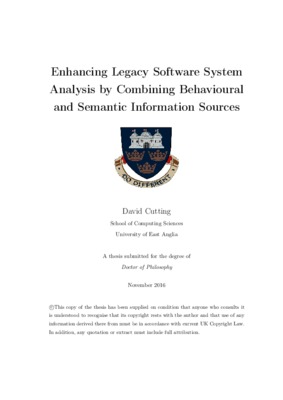 By David Cutting
Get PDF (2 MB)

Computer software is, by its very nature highly complex and invisible yet subject to a near-continual pressure to change. Over time the development process has become more mature and less risky. This is in large part due to the concept of software traceability; the ability to relate software components back to their initial requirements and between each other. Such traceability aids tasks such as maintenance by facilitating the prediction of “ripple effects” that may result, and aiding comprehension of software structures in general. Many organisations, however, have large amounts of software for which little or no documentation exists; the original developers are no longer available and yet this software still underpins critical functions. Such “legacy software” can therefore represent a high risk when changes are required. Consequently, large amounts of effort go into attempting to comprehend and understand legacy software. The most common way to accomplish this, given that reading the code directly is hugely time consuming and near-impossible, is to reverse engineer the code, usually to a form of representative projection such as a UML class diagram. Although a wide number of tools and approaches exist, there is no empirical way to compare them or validate new developments. Consequently there was an identified need to define and create the Reverse Engineering to Design Benchmark (RED-BM). This was then applied to a number of industrial tools. The measured performance of these tools varies from 8.8% to 100%, demonstrating both the effectiveness of the benchmark and the questionable performance of several tools. In addition to the structural relationships detectable through static reverse engineering, other sources of information are available with the potential to reveal other types of relationships such as semantic links. One such source is the mining of source code repositories which can be analysed to find components within a software system that have, historically, commonly been changed together during the evolution of the system and from the strength of that infer a semantic link. An approach was implemented to mine such semantic relationships from repositories and relationships were found beyond those expressed by static reverse engineering. These included groups of relationships potentially suitable for clustering. To allow for the general use of multiple information sources to build traceability links between software components a uniform approach was defined and illustrated. This includes rules and formulas to allow combination of sources. The uniform approach was implemented in the field of predictive change impact analysis using reverse engineering and repository mining as information sources. This implementation, the Java Code Relationship Anlaysis (jcRA) package, was then evaluated against an industry standard tool, JRipples. Depending on the target, the combined approach is able to outperform JRipples in detecting potential impacts with the risk of over-matching (a high number of false-positives and overall class coverage on some targets)