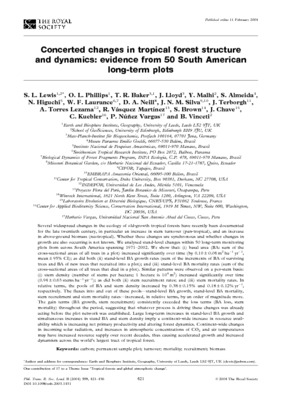 Several widespread changes in the ecology of old-growth tropical forests have recently been documented for the late twentieth century, in particular an increase in stem turnover (pan-tropical), and an increase in above-ground biomass (neotropical). Whether these changes are synchronous and whether changes in growth are also occurring is not known. We analysed stand-level changes within 50 long-term. monitoring plots from across South America spanning 1971-2002. We show that: (i) basal area (BA: sum of the cross-sectional areas of all trees in a plot) increased significantly over time (by 0.10 +/- 0.04 m(2) ha(-1) yr(-1), mean +/- 95% CI); as did both (ii) stand-level BA growth rates (sum of the increments of BA of surviving trees and BA of new trees that recruited into a plot); and (iii) stand-level BA mortality rates (sum of the cross-sectional areas of all trees that died in a plot). Similar patterns were observed on a per-stem basis: (i) stem density (number of stems per hectare; 1 hectare is 10(4) m(2)) increased significantly over time (0.94 +/- 0.63 stems ha(-1) yr(-1)); as did both (ii) stem recruitment rates; and (iii) stem mortality rates. In relative terms, the pools of BA and stem density increased by 0.38 +/- 0.15% and 0.18 +/- 0.12% yr(-1), respectively. The fluxes into and out of these pools-stand-level BA growth, stand-level BA mortality, stem recruitment and stem mortality rates-increased, in relative terms, by an order of magnitude more. The gain terms (BA growth, stem recruitment) consistently exceeded the loss terms (BA loss, stem mortality) throughout the period, suggesting that whatever process is driving these changes was already acting before the plot network was established. Large long-term increases in stand-level BA growth and simultaneous increases in stand BA and stem density imply a continent-wide increase in resource availability which is increasing net primary productivity and altering forest dynamics. Continent-wide changes in incoming solar radiation, and increases in atmospheric concentrations of CO2 and air temperatures may have increased resource supply over recent decades, thus causing accelerated growth and increased dynamism across the world's largest tract of tropical forest