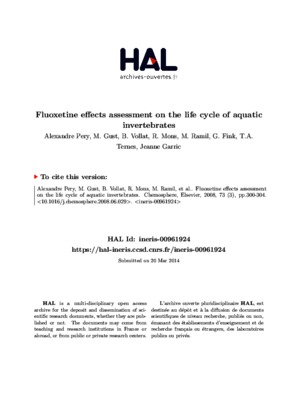 Fluoxetine effects assessment on the life cycle of aquatic invertebrates

International audienceFluoxetine is a serotonin re-uptake inhibitor, generally used as an antidepressant. It is suspected to provoke substantial effects in the aquatic environment. This study reports the effects of fluoxetine on the life cycle of four invertebrate species, Daphnia magna, Hyalella azteca and the snail Potamopyrgus antipodarum exposed to fluoxetine spiked-water and the midge Chironomus riparius exposed to fluoxetine-spiked sediments. For D. magna, a multi-generational study was performed with exposition of newborns from exposed organisms. Effects of fluoxetine could be found at low measured concentrations (around 10 micro g l(-1)), especially for parthenogenetic reproduction of D. magna and P. antipodarum. For daphnids, newborns length was impacted by fluoxetine and the second generation of exposed individuals showed much more pronounced effects than the first one, with a NOEC of 8.9 micro g l(-1). For P. antipodarum, significant decrease of reproduction was found for concentrations around 10 micro g l(-1). In contrast, we found no effect on the reproduction of H. azteca but a significant effect on growth, which resulted in a NOEC of 33 micro g l(-1), expressed in nominal concentration. No effect on C. riparius could be found for measured concentrations up to 59.5 mg kg(-1). General mechanistic energy-based models showed poor relevance for data analysis, which suggests that fluoxetine targets specific mechanisms of reproduction