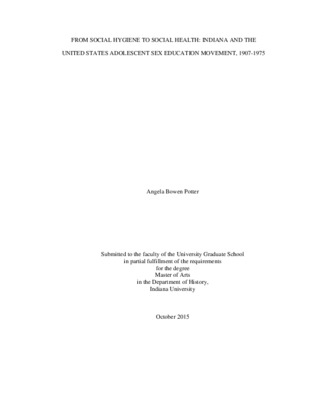 IndianapolisThis thesis examines the evolution of the adolescent sex education during from 1907 to 1975, from the perspective of Indiana and highlights the contingencies, continuities, and discontinuities across place and time. This period represents the establishment of the defining characteristics of sex education in Indiana as locally controlled and school-based, as well as the Social Health Association’s transformation from one of a number of local social hygiene organizations to the nation’s only school based social health agency. Indiana was not a local exception to the American sex education movement, but SHA was exceptional for SHA its organizational longevity, adaptation, innovation in school-based curriculum, and national leadership in sex education. Indiana sex education leadership seems, at first glance, incongruous due to Indiana’s conservative politics. SHA’s efforts to adapt the message, curriculum, and operation in Indiana’s conservative climate helped it endure and take leadership role on a national stage. By 1975, sex education came to be defined as school based, locally controlled and based on the medicalization of health, yet this growing national consensus belied deep internal contradictions where sex education was not part of the regular school health curriculum and outside of the schools’ control. Underlying this story is fundamental difference between social hygiene and health, that hygiene is a set of practices to prevent disease, while health is an internal state to promote wellness