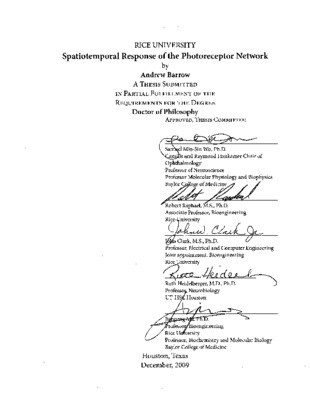 Spatiotemporal response of the photoreceptor network

By Andrew Barrow
Get PDF (5 MB)

The retina is a specialized part of the central nervous system adapted to encoding images into electrical signals. Images are formed on the back of the eye by the lens and cornea, and photons that make up those images are absorbed by light sensitive pigments in the photoreceptors. Photon absorptions by these pigments generate a current, the photocurrent, which is modified by voltage-gated ion channels and electrical connections to adjacent photoreceptors. A voltage change in the photoreceptor is transformed into a chemical signal to downstream cells by its modulatory effect on the calcium concentration at the synapse. This thesis examines two important elements in photoreceptor function other than the photocurrent: the Ih current and electrical coupling between rods. Here, using the tiger salamander (Ambystoma tigrinum) as a model, we investigate the kinetic properties of the HCN channels responsible for the Ih current in photoreceptors, and show that they are similar in rods and cones, which in turn are similar to the known properties of the HCN1 isoform. With western blot and immunostaining, we show that the HCN1 isoform is present in retina. We also demonstrate how HCN channels modify the kinetics of the rod and cone light response to make it faster. This thesis integrates this and other data from photoreceptor ion channels into physiology-based models of rod and cone photoreceptors. Through simulation, the model of the rod demonstrates that conductance changes from the h and Kx currents largely cancel one another during the rod light response. The cone model is used to demonstrate the feasibility of two proposed mechanisms for horizontal cell to cone negative feedback. Finally, this work presents measurements of electrical coupling between rod photoreceptors in the salamander retina using both light and electrical stimuli. Using measured parameters for the coupling resistance, a model of the electrically coupled network of rod photoreceptors is developed. We use this model to demonstrate how rod-rod coupling decreases noise at the expense of attenuating sharp contrasts in visual scenes. The model predicts the tradeoff between these two factors results in an overall improvement in the signal-to-noise ratio for most perceptible stimuli. Results suggest that photoreceptor coupling is especially helpful in the perception of images with statistical qualities similar to natural scenes