Changes in Hedonic and Eudaimonic Well-Being After a Severe Nationwide Disaster: The Case of the Great East Japan Earthquake

This paper presents the results of a longitudinal survey (N = 10, 744) that examined how the Great East Japan Earthquake of March 2011 affected the hedonic and eudaimonic well-being of young people in Japan outside of the afflicted area. Our dataset consists of Japanese citizens in their 20 and 30s from all non-afflicted prefectures. We conducted two surveys on well-being, one before the earthquake (December 2010) and one after (March 2011). The results suggested that people who were thinking about the earthquake when they completed the second survey had slightly increased general well-being after the earthquake as compared to before, showing that reflecting on the earthquake had prompted them to reevaluate their lives and increased eudaimonia. However, they experienced temporary negative emotional reactions more frequently, which shows that their sympathy for those in the afflicted area decreased their hedonic well-being. After the earthquake, Japanese youth were likely to value social connectedness and ordinary life. Moreover, this mindset promoted prosocial behaviors such as making donations and volunteering 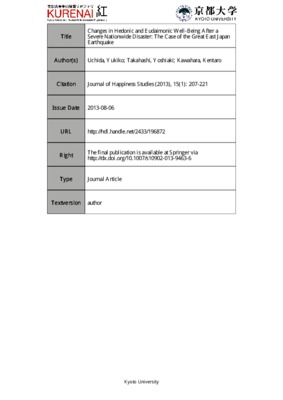 This paper was published in Kyoto University Research Information Repository.