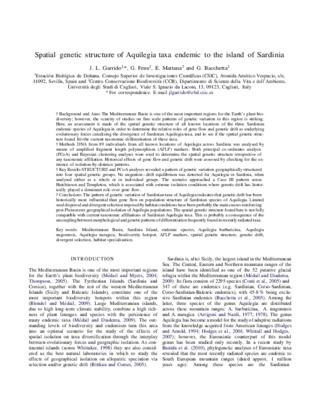 Background and Aims The Mediterranean Basin is one of the most important regions for the Earths plant biodiversity; however, the scarcity of studies on fine scale patterns of genetic variation in this region is striking. Here, an assessment is made of the spatial genetic structure of all known locations of the three Sardinian endemic species of Aquilegia in order to determine the relative roles of gene flow and genetic drift as underlying evolutionary forces canalizing the divergence of Sardinian Aquilegia taxa, and to see if the spatial genetic structure found fits the current taxonomic differentiation of these taxa. Methods DNA from 89 individuals from all known locations of Aquilegia across Sardinia was analysed by means of amplified fragment length polymorphism (AFLP) markers. Both principal co-ordinates analysis (PCoA) and Bayesian clustering analyses were used to determine the spatial genetic structure irrespective of any taxonomic affiliation. Historical effects of gene flow and genetic drift were assessed by checking for the existence of isolation-by-distance patterns. Key Results STRUCTURE and PCoA analyses revealed a pattern of genetic variation geographically structured into four spatial genetic groups. No migrationdrift equilibrium was detected for Aquilegia in Sardinia, when analysed either as a whole or in individual groups. The scenario approached a Case III pattern sensu Hutchinson and Templeton, which is associated with extreme isolation conditions where genetic drift has historically played a dominant role over gene flow. Conclusions The pattern of genetic variation of Sardinian taxa of Aquilegia indicates that genetic drift has been historically more influential than gene flow on population structure of Sardinian species of Aquilegia. Limited seed dispersal and divergent selection imposed by habitat conditions have been probably the main causes reinforcing post-Pleistocene geographical isolation of Aquilegia populations. The spatial genetic structure found here is not fully compatible with current taxonomic affiliations of Sardinian Aquilegia taxa. This is probably a consequence of the uncoupling between morphological and genetic patterns of differentiation frequently found in recently radiated taxa. © The Author 2012.Peer Reviewe