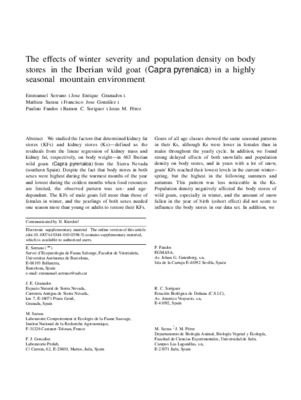 We studied the factors that determined kidney fat stores (KFs) and kidney stores (Ks)-defined as the residuals from the linear regression of kidney mass and kidney fat, respectively, on body weight-in 463 Iberian wild goats (Capra pyrenaica) from the Sierra Nevada (southern Spain). Despite the fact that body stores in both sexes were highest during the warmest months of the year and lowest during the coldest months when food resources are limited, the observed pattern was sex- and age-dependent. The KFs of male goats fell more than those of females in winter, and the yearlings of both sexes needed one season more than young or adults to restore their KFs. Goats of all age classes showed the same seasonal patterns in their Ks, although Ks were lower in females than in males throughout the yearly cycle. In addition, we found strong delayed effects of both snowfalls and population density on body stores, and in years with a lot of snow, goats' KFs reached their lowest levels in the current winter-spring, but the highest in the following summers and autumns. This pattern was less noticeable in the Ks. Population density negatively affected the body stores of wild goats, especially in winter, and the amount of snow fallen in the year of birth (cohort effect) did not seem to influence the body stores in our data set. In addition, we assessed the accuracy of the residuals from the regression between body size and body mass for monitoring body condition of live wild goats and concluded that, although it poorly indicates fat stores, it could be used as a general proxy of body condition. Finally, we discuss the expected effects of climate warming on body stores in this Mediterranean Caprinae species. © 2010 Springer-Verlag.Peer Reviewe