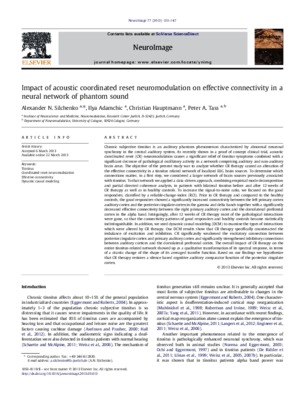 Chronic subjective tinnitus is an auditory phantom phenomenon characterized by abnormal neuronal synchrony in the central auditory system. As recently shown in a proof of concept clinical trial, acoustic coordinated reset (CR) neuromodulation causes a significant relief of tinnitus symptoms combined with a significant decrease of pathological oscillatory activity in a network comprising auditory and non-auditory brain areas. The objective of the present study was to analyze whether CR therapy caused an alteration of the effective connectivity in a tinnitus related network of localized EEG brain sources. To determine which connections matter, in a first step, we considered a larger network of brain sources previously associated with tinnitus. To that network we applied a data-driven approach, combining empirical mode decomposition and partial directed coherence analysis, in patients with bilateral tinnitus before and after 12weeks of CR therapy as well as in healthy controls. To increase the signal-to-noise ratio, we focused on the good responders, classified by a reliable-change-index (RCI). Prior to CR therapy and compared to the healthy controls, the good responders showed a significantly increased connectivity between the left primary cortex auditory cortex and the posterior cingulate cortex in the gamma and delta bands together with a significantly decreased effective connectivity between the right primary auditory cortex and the dorsolateral prefrontal cortex in the alpha band. Intriguingly, after 12weeks of CR therapy most of the pathological interactions were gone, so that the connectivity patterns of good responders and healthy controls became statistically indistinguishable. In addition, we used dynamic causal modeling (DCM) to examine the types of interactions which were altered by CR therapy. Our DCM results show that CR therapy specifically counteracted the imbalance of excitation and inhibition. CR significantly weakened the excitatory connection between posterior cingulate cortex and primary auditory cortex and significantly strengthened inhibitory connections between auditory cortices and the dorsolateral prefrontal cortex. The overall impact of CR therapy on the entire tinnitus-related network showed up as a qualitative transformation of its spectral response, in terms of a drastic change of the shape of its averaged transfer function. Based on our findings we hypothesize that CR therapy restores a silence based cognitive auditory comparator function of the posterior cingulate cortex