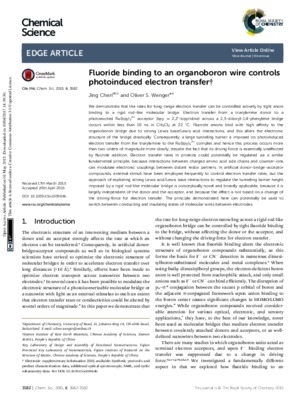 By Jing Chen and Oliver S. Wenger
Get PDF (1 MB)

We demonstrate that the rates for long-range electron transfer can be controlled actively by tight anion binding to a rigid rod-like molecular bridge. Electron transfer from a triarylamine donor to a photoexcited Ru(bpy)32+ acceptor (bpy = 2,2′-bipyridine) across a 2,5-diboryl-1,4-phenylene bridge occurs within less than 10 ns in CH2Cl2 at 22 °C. Fluoride anions bind with high affinity to the organoboron bridge due to strong Lewis base/Lewis acid interactions, and this alters the electronic structure of the bridge drastically. Consequently, a large tunneling barrier is imposed on photoinduced electron transfer from the triarylamine to the Ru(bpy)32+ complex and hence this process occurs more than two orders of magnitude more slowly, despite the fact that its driving force is essentially unaffected by fluoride addition. Electron transfer rates in proteins could potentially be regulated via a similar fundamental principle, because interactions between charged amino acid side chains and counter-ions can modulate electronic couplings between distant redox partners. In artificial donor-bridge-acceptor compounds, external stimuli have been employed frequently to control electron transfer rates, but the approach of exploiting strong Lewis acid/Lewis base interactions to regulate the tunneling barrier height imposed by a rigid rod-like molecular bridge is conceptually novel and broadly applicable, because it is largely independent of the donor and the acceptor, and because the effect is not based on a change of the driving-force for electron transfer. The principle demonstrated here can potentially be used to switch between conducting and insulating states of molecular wires between electrodes