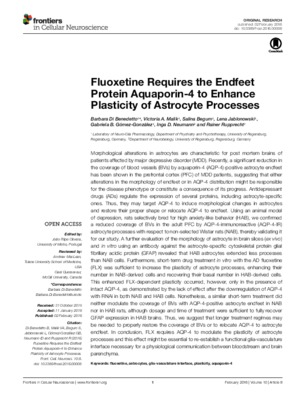 Morphological alterations in astrocytes are characteristic for post mortem brains of patients affected by major depressive disorder (MDD). Recently, a significant reduction in the coverage of blood vessels (BVs) by aquaporin-4 (AQP-4)-positive astrocyte endfeet has been shown in the prefrontal cortex (PFC) of MDD patients, suggesting that either alterations in the morphology of endfeet or in AQP-4 distribution might be responsible for the disease phenotype or constitute a consequence of its progress. Antidepressant drugs (ADs) regulate the expression of several proteins, including astrocyte-specific ones. Thus, they may target AQP-4 to induce morphological changes in astrocytes and restore their proper shape or relocate AQP-4 to endfeet. Using an animal model of depression, rats selectively bred for high anxiety-like behavior (HAB), we confirmed a reduced coverage of BVs in the adult PFC by AQP-4-immunoreactive (AQP-4-IR) astrocyte processes with respect to non-selected Wistar rats (NAB), thereby validating it for our study. A further evaluation of the morphology of astrocyte in brain slices (ex vivo) and in vitro using an antibody against the astrocyte-specific cytoskeletal protein glial fibrillary acidic protein (GFAP) revealed that HAB astrocytes extended less processes than NAB cells. Furthermore, short-term drug treatment in vitro with the AD fluoxetine (FLX) was sufficient to increase the plasticity of astrocyte processes, enhancing their number in NAB-derived cells and recovering their basal number in HAB-derived cells. This enhanced FLX-dependent plasticity occurred, however, only in the presence of intact AQP-4, as demonstrated by the lack of effect after the downregulation of AQP-4 with RNAi in both NAB and HAB cells. Nonetheless, a similar short-term treatment did neither modulate the coverage of BVs with AQP-4-positive astrocyte endfeet in NAB nor in HAB rats, although dosage and time of treatment were sufficient to fully recover GFAP expression in HAB brains. Thus, we suggest that longer treatment regimes may be needed to properly restore the coverage of BVs or to relocate AQP-4 to astrocyte endfeet. In conclusion, FLX requires AQP-4 to modulate the plasticity of astrocyte processes and this effect might be essential to re-establish a functional glia-vasculature interface necessary for a physiological communication between bloodstream and brain parenchyma