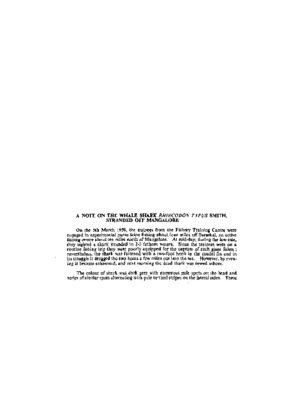 A note on the whale shark Rhincodon typus Smith, stranded off Mangalore

On the 5th March 1959, the trainees from the Fishery Training Centre were engaged in experimental purse seine fishing about four miles off Suratkal, an active fishing centre about ten miles north of Mangalore. At mid-day, during the low tide, they sighted a shark stranded in 2-3 fathom waters. Since the trainees were on a routine fishing trip they were poorly equipped for the capture of such giant fishes ; nevertheless, the shark was fastened with a two-foot hook in the caudal fin and in its struggle it dragged the two boats a few miles out into the sea. However, by evening it became exhausted, and next morning the dead shark was towed ashore