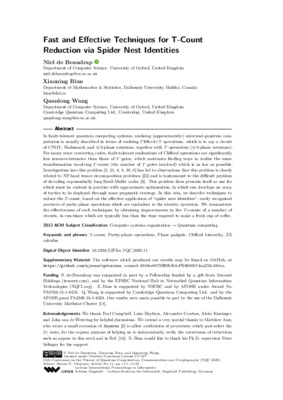 In fault-tolerant quantum computing systems, realising (approximately) universal quantum computation is usually described in terms of realising Clifford+T operations, which is to say a circuit of CNOT, Hadamard, and ?/2-phase rotations, together with T operations (?/4-phase rotations). For many error correcting codes, fault-tolerant realisations of Clifford operations are significantly less resource-intensive than those of T gates, which motivates finding ways to realise the same transformation involving T-count (the number of T gates involved) which is as low as possible. Investigations into this problem [Matthew Amy et al., 2013; Gosset et al., 2014; Matthew Amy et al., 2014; Matthew Amy et al., 2018; Earl T. Campbell and Mark Howard, 2017; Matthew Amy and Michele Mosca, 2019] has led to observations that this problem is closely related to NP-hard tensor decomposition problems [Luke E. Heyfron and Earl T. Campbell, 2018] and is tantamount to the difficult problem of decoding exponentially long Reed-Muller codes [Matthew Amy and Michele Mosca, 2019]. This problem then presents itself as one for which must be content in practise with approximate optimisation, in which one develops an array of tactics to be deployed through some pragmatic strategy. In this vein, we describe techniques to reduce the T-count, based on the effective application of "spider nest identities": easily recognised products of parity-phase operations which are equivalent to the identity operation. We demonstrate the effectiveness of such techniques by obtaining improvements in the T-counts of a number of circuits, in run-times which are typically less than the time required to make a fresh cup of coffee