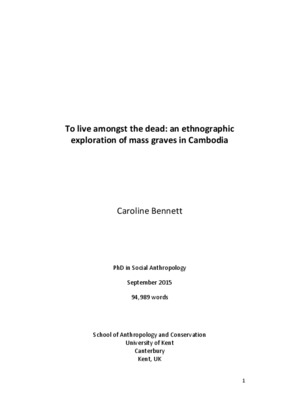 To Live Amongst the Dead: an Ethnographic Exploration of Mass Graves in Cambodia

By Caroline Bennett
Get PDF (30 MB)

This thesis uses mass graves as a lens through which to examine how people in contemporary Cambodia use the Khmer Rouge period (1975 – 1979) to reconstitute and re-imagine the world they live in. Based on sixteen months of multisited ethnographic fieldwork, this thesis will argue that the Khmer Rouge regime was a critical event (Das 1997) in Cambodian life, and as such has triggered a re-shaping of relationships between local and the national, and the national and the global, leading to new forms of social and community life and action in post Khmer Rouge Cambodia. As physical markers of violence and political instability, mass graves are inherently political and articulate these re-imaginations on the state, community, and individual level. The Cambodian state exercises and legitimates its authority by constructing modern history in reference to a narrative of liberation from the Khmer Rouge, and the ‘innocent suffering’ of Cambodia and its people, while local communities use Buddhism and animism to narrate and conceptualise the period, bringing it into expected and understandable events within Khmer Buddhist cosmology. These approaches are not necessarily in opposition to one another, but rather represent the overlapping plurality of connections with mass graves. This thesis provides a unique exploration of social relationships to mass graves in Cambodia contributing to debates within the anthropology of politics, violence and collective memory by examining how moments of national mass violence re-shape the state and relationships within it, and how destructive periods of violence nonetheless create new fields for the imagination of the political, the religious, and the social. It also contributes to the emerging field of Cambodian ethnography that combines local considerations with wider national and geo-political discourses and how these are played out at the local level