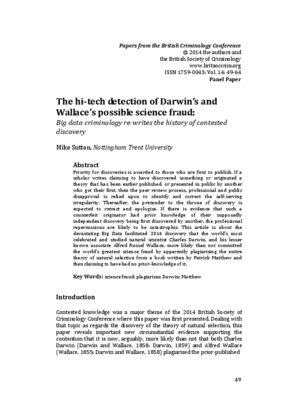 Priority for discoveries is awarded to those who are first to publish. If a scholar writes claiming to have discovered something or originated a theory that has been earlier published, or presented in public by another who got their first, then the peer review process, professional and public disapproval is relied upon to identify and correct the self-serving irregularity. Thereafter, the pretender to the throne of discovery is expected to retract and apologise. If there is evidence that such a counterfeit originator had prior knowledge of their supposedly independent discovery being first discovered by another, the professional repercussions are likely to be catastrophic. This article is about the devastating Big Data facilitated 2014 discovery that the world’s most celebrated and studied natural scientist Charles Darwin, and his lesser known associate Alfred Russel Wallace, more likely than not committed the world’s greatest science fraud by apparently plagiarising the entire theory of natural selection from a book written by Patrick Matthew and then claiming to have had no prior-knowledge of it