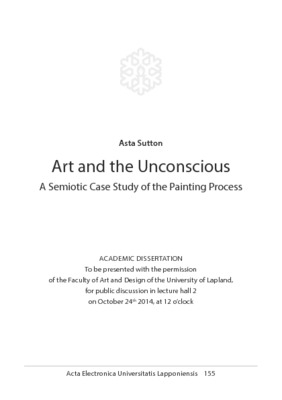 Art and the unconscious : a semiotic case study of the painting process

This dissertation is an attempt to design an interpretation model for the comprehension of unconscious content in artworks, as well as to find painting techniques to free the unconscious mind, allowing it to be expressed through artwork. The interpretation model, still in its infancy, is ripe for further development. The unconscious mind is a fascinating subject—in art production as well as in many scientific fields. This hidden part of the mind, being the source of creativity, constitutes an important foundation for many possible and valuable inquiries in multiple areas of knowledge. In the present study, the unconscious is approached from an art-educational perspective. The nature of the unconscious is addressed through the theories of Carl Gustav Jung and Charles Sanders Peirce, as well as through the information gained from data the author produced herself during the experimental painting process she devised for this study. For psychological distinctions not addressed by Jung, the theories of Sigmund Freud are used to forward this inquiry into the unconscious mind. A research method was created to bring Peirce’s theories into consonance with Jung’s amplification method. Since Peirce’s theories are challenging to read, to avoid misinterpretation, the author used Phyllis Chiasson’s 2001 book Peirce’s Pragmatism: The Design for Thinking as a secondary source. Peirce’s three modes of reality—firstness, secondness, and thirdness—were utilized to interpret artworks. This three-mode reality allows interpreters to reflect on their subjective feelings and then to compare them to collected data. The interpreters’ intuitive self-interpretations often correlate well with the more objective data. In this approach to interpretation, the work of art is seen as a sign, in the Jungian as well as in the Peircean sense, and interpretation seeks to discover a sign’s objects—icon, index, and symbol. Additionally, the objects are studied in combination with Peirce’s designation of the sign’s character elements—sinsign, qualisign, and legisign. Peirce’s theory offers a logical and productive structure for approaching a variety of signs and reaching a multiplicity of interpretations. Jungian theories inculcated a combined psychological and artistic perspective for the interpretation of artworks. Jung’s method of amplification is an effort to bring a symbol to life, and it is used as a technique to discover—through the seeking of parallels—a possible context for any unconscious content that an image might have. In amplification, a word or element—from a fantasy, dream, or, in this study, artwork—is associated, through use of what Jung called the active imagination, with another context where it also occurs. It must be remembered that unconscious images in artworks do not easily open themselves up for interpretation. One way to interpret possibly unconscious images is for the interpreter to become vulnerable by employing his or her own unconscious mind to interpret an artwork; such use of the active imagination can enable a subjective experience of the artwork on the part of the interpreter, who might thereby uncover unconscious content. Moreover, in this study, Jung’s theory of archetypes is employed, in parallel with Peirce’s and Jung’s theories of the sign, to illuminate an artwork’s images by connecting them with collective unconscious archetypes. The author relied upon The Book of Symbols: Reflections on Archetypal Images (Ronnberg and Martin 2010) as the main source for interpreting possibly unconscious elements in the artworks. This approach is especially powerful when artists interpret their own artwork—possibly leading to a galvanizing self-discovery as they revisit past encounters, personal highlights, and other pieces of unconscious content that might reveal previously unknown meaning important to their life. By comparing archetypes to the unconscious content in their own lives, people can discover themselves. Unconscious phenomena were approached on both the theoretical and empirical levels. Different methods and ideas were used to stimulate the author’s unconscious thinking while performing artwork analyses of three paintings: surrealist Salvador Dalí’s (1904–1989) Assumpta Corpuscularia Lapislazulina; abstract expressionist Jackson Pollock’s (1912-1956) The Deep; and one painting by the author herself, and for which the process of painting is videorecorded (www.astagallery.com/academic.html). With regard to the third painting interpreted, the author is the study subject, and her artistic production is used as an opportunity to explore the unconscious mind. During the act of painting, an attempt is made to free unconscious thinking by fusing Dalí’s and Pollock’s methods as well as by testing multiple other methods. The author’s artistic production was conjoined with use of a technique that is called the verbal protocol method, which generates additional data not necessarily visible in the final artwork. This method unseals the artist’s tacit knowledge, which in normal circumstances remains silent. In the verbal protocol method, the author, while engaged in the act of painting, speaks aloud the stream of consciousness that accompanies and guides the art-making activity; the recorded and transcribed monologue from the artistic production is supplied, in both Finnish and English, in appendices. This thinking-aloud technique allows a person to become more self-aware and to create more solutions while struggling with emergent artistic problems. Such narratives can reveal more about the painting than the completed artwork alone can convey. Along with the artist’s finished painting and the videorecorded material, narratives produced during the painting activity were interpreted. Moreover, the discoveries arising from the author’s interpretation of her own artwork are correlated with some of the latest research on the unconscious. This study allows the reader-viewer an intimate glimpse into the author’s subjective painting experience and demonstrates the participation of the unconscious in an artwork’s creation. The interpretations methodology constitutes an interpretation model suitable for other artists and art educators to follow. Keywords: unconscious, art, archetype, mandal