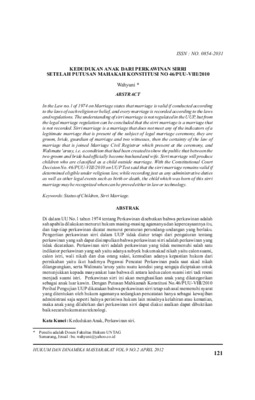 In the Law no. l of 1974 on Marriage states that marriage is valid if conducted according to the laws of each religion or belief, and every marriage is recorded according to the laws and regulations. The understanding of sirri marriage is not regulated in the UUP, but from the legal marriage regulation can be concluded that the sirri marriage is a marriage that is not recorded. Sirri marriage is a marriage that does not meet any of the indicators of a legitimate marriage that is present of the subject of legal marriage ceremony, they are groom, bride, guardian of marriage and two witnesses, then the certainty of the law of marriage that is joined Marriage Civil Registrar which present at the ceremony, and Walimatu 'arusy, i.e. a condition that had been created to show the public that between the two groom and bride had officially become husband and wife. Sirri marriage will produce children who are classified as a child outside marriage. With the Constitutional Court Decision No. 46/PUU-VIII/2010 on UUP Test said that the sirri marriage remains valid if determined eligible under religious law, while recording just as any administrative duties as well as other legal events such as birth or death, the child which was born of this sirri marriage may be recognized when can be proved either in law or technology