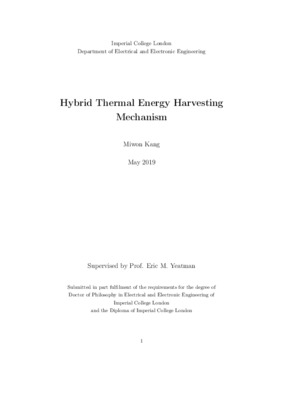 This thesis investigates energy harvesting, which captures ambient energy and converts it into a useful form. Such technology is a promising alternative to batteries for powering low-energy electronics. Hybrid thermal energy harvesting has been proposed, which converts heat energy into electricity. This approach has a simple beam structure consisting of a bimetallic beam and a layer of pyroelectric material to utilise piezo- and pyro-electric effects in a low-frequency heat cycle. The heat cycle allows the pyroelectric material layer to simultaneously produce both pyroelectricity and deformation for piezoelectricity. Two approaches have been taken to improve the performance of the mechanism: examining the phase relationship between two effects, and increasing the thermal load of the beam. First, a cantilever beam (i.e. the fixed-free configuration) was employed. Experimental results showed that the two effects counteract. The configuration has been changed to fixed-fixed. Accordingly, the deflection direction of the heated bimetallic beam was reversed, resulting in a phase difference between configurations. Second, the beam was subjected to a larger thermal load in fixed-fixed than in fixed-free. Consequently, in fixed-fixed, this approach has about 50% improvement in output voltage compared to fixed-free. Further research has been conducted by changing the dimensions of the prototypes to improve performance. The thermal load increased as the beam became thinner and wider. The finite element method was used to study heat dynamics. The thermal behaviour of the beam was simulated. A model was built to estimate the output of this approach and proved by experiments. The model was used to estimate the output power generated by waste heat from desktop computers. This study provides basic guidelines for designing hybrid thermal energy harvesting.Open Acces