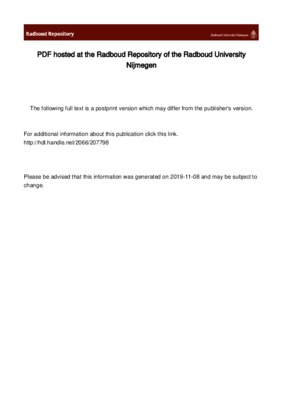 Contains fulltext : 207798pos.pdf (postprint version ) (Open Access)Background: High-intensity aerobic exercise might attenuate the symptoms of Parkinson's disease, but high-quality evidence is scarce. Moreover, long-term adherence remains challenging. We aimed to evaluate the effectiveness of aerobic exercise-gamified and delivered at home, to promote adherence-on relieving motor symptoms in patients with Parkinson's disease with mild disease severity who were on common treatment regimes. Methods: In this single-centre, double-blind, randomised controlled trial (Park-in-Shape), we recruited sedentary patients with Parkinson's disease from the outpatient clinic at Radboudumc, Nijmegen, Netherlands. Patients were made aware of the study either by their treating neurologist or via information in the waiting room. Patients could also contact the study team via social media. We included patients aged 30-75 years with a Hoehn and Yahr stage of 2 or lower, who were on stable dopaminergic medication. Patients were randomly assigned (in a 1:1 ratio) to either aerobic exercise done on a stationary home-trainer (aerobic intervention group) or stretching (active control group) by means of a web-based system with minimisation for sex and medication status (treated or untreated) and permuted blocks of varying sizes of more than two (unknown to study personnel). Patients were only aware of the content of their assigned programme. Assessors were unaware of group assignments. Both interventions were home based, requiring 30-45 min training three times per week for 6 months. Both groups received a motivational app and remote supervision. Home trainers were enhanced with virtual reality software and real-life videos providing a so-called exergaming experience (ie, exercise enhanced by gamified elements). The primary outcome was the between-group difference in the Movement Disorders Society-Unified Parkinson's Disease Rating Scale (MDS-UPDRS) motor section at 6 months, tested during the off state (>/=12 h after last dopaminergic medication). The analysis was done on an intention-to-treat basis in patients who completed the follow-up assessment, regardless of whether they completed the assigned intervention. Patients reported adverse events directly to their coach and also after the 6-month visit retrospectively. A between-group difference of 3.5 points or more was deemed a-priori clinically relevant. The study is concluded and registered with the Dutch Trial Registry, NTR4743. Findings: Between Feb 2, 2015, and Oct 27, 2017, 139 patients were assessed for eligibility in person, of whom 130 were randomly assigned to either the aerobic intervention group (n=65) or the active control group (n=65). Data from 125 (96%) patients were available for the primary analysis; five patients were lost to follow-up (four in the intervention group; one in the control group). 20 patients (ten in each group) did not complete their assigned programme. The off-state MDS-UPDRS motor score revealed a between-group difference of 4.2 points (95% CI 1.6-6.9, p=0.0020) in favour of aerobic exercise (mean 1.3 points [SE 1.8] in the intervention group and 5.6 points [SE 1.9] for the control group). 11 patients had potentially related adverse events (seven [11%] in the intervention group, four [6%] in the control group) and seven had unrelated serious adverse events (three in the intervention group [vestibilar disorder, vasovagal collapse, knee injury during gardening that required surgery; 6%], four in the control group [supraventricular tachycardia, hip fracture, fall related injury, severe dyskinesias after suprathreshold dose levodopa in a patient with deep brain stimulation; 7%]). Interpretation: Aerobic exercise can be done at home by patients with Parkinson's disease with mild disease severity and it attenuates off-state motor signs. Future studies should establish long-term effectiveness and possible disease-modifying effects. Funding: Netherlands Organization for Health Research and Development.11 p