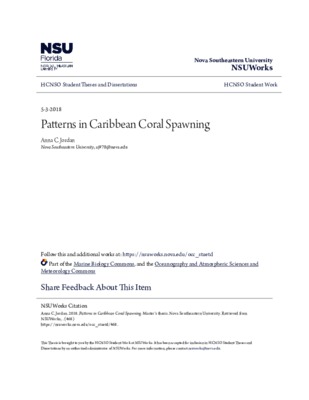 Most corals worldwide are broadcast spawners that rely on synchronous gamete release for successful fertilization. Spawning synchrony may also decrease the probability of heterospecific fertilization that may produce maladaptive hybrids. Despite the importance of reproductive timing, researchers have only recently begun to collect spawning data across coral species in the Caribbean, but these data remain to be analyzed. This study investigates interannual, seasonal, and environmental patterns that may influence Caribbean scleractinian spawning times. The number of spawning observations varies widely among location and species. Most spawning observations were collected in Florida, Curaçao, and Flower Garden Banks National Marine Sanctuary. Acropora palmata, A. cervicornis, and Orbicella species were the most documented. The Orbicella spp. were very consistent for spawning day annually, while the acroporids were less reliable. However, the acroporids were more consistent for spawning time in minutes after sunset between years. Season and moon cycles were obvious proximate cues for spawning, but a strong influence from wind and tides was absent. Acropora cervicornis was the only species in this study which spawning was significantly affected by water temperature. For some scleractinians, the day of spawning was significantly affected by mass bleaching events; spawning could occur on earlier days than in previous years for up to two years after the event. This study highlights existing data gaps for Pseudodiploria clivosa, A. prolifera and Siderastrea siderea. Documenting spawning patterns is crucial to better understand the potential impacts of future threats on the already imperiled Caribbean corals at risk from reproductive failure