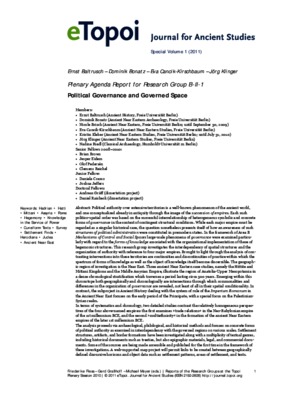 Political authority over extensive territories is a well-known phenomenon of the ancient world, and one conceptualized already in antiquity through the image of the succession of empires. Each such politico-spatial order was based on the successful interrelationship of heterogeneous symbolic and concrete forms of governance in the context of contingent structural conditions. While each major empire must be regarded as a singular historical case, the question nonetheless presents itself of how an awareness of such structures of political administration were constituted in premodern states. In the framework of Area B »Mechanisms of Control and Social Spaces« large-scale phenomena of governance were examined particularly with regard to the forms of knowledge associated with the organizational implementation of these of hegemonic structures. This research group investigates the interdependency of spatial structures and the organization of authority with reference to four major empires. Brought to light through the analysis of contrasting interventions into these territories are continuities and discontinuities of practice within which the spectrum of forms of knowledge as well as the object of knowledge itself become discernible. The geographic region of investigation is the Near East. Three ancient Near Eastern case studies, namely the Hittite and Mittani Kingdoms and the Middle Assyrian Empire, illustrate the region of Anatolia-Upper Mesopotamia in a dense chronological stratification which traverses a period lasting circa 500 years. Emerging within this chronotope both geographically and chronologically are intersections through which commonalities and differences in the organization of governance are revealed, not least of all in their spatial conditionality. In contrast, the subproject in Ancient History dealing with the system of rule of the Imperium Romanum in the Ancient Near East focuses on the early period of the Principate, with a special focus on the Palestinian-Syrian realm. In terms of systematics and chronology, two detailed studies contrast the relatively homogeneous perspectives of the four above-named empires: the first examines »trade relations« in the Neo-Babylonian empire of the 1st millennium BCE, and the second »multiethnicity« in the formation of the ancient Near Eastern empires of the later 1st millennium BCE. The analysis proceeds via archaeological, philological, and historical methods and focuses on concrete forms of political authority as exercised in interdependency with the governed regions on various scales. Settlement structures, artifacts, and border formations have been investigated along with a multiplicity of textual genres, including historical documents such as treaties, but also epigraphic materials, legal, and commercial documents. Some of the sources are being made accessible and published for the first time in the framework of these investigations. A web- supported map project will permit links to be created between geographically defined discursive horizons and object data such as settlement patterns, areas of settlement, and texts