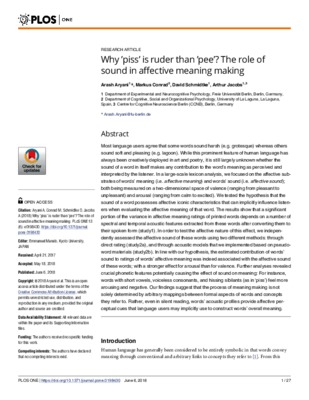 Why 'piss' is ruder than 'pee'? The role of sound in affective meaning making

Most language users agree that some words sound harsh (e.g. grotesque) whereas others sound soft and pleasing (e.g. lagoon). While this prominent feature of human language has always been creatively deployed in art and poetry, it is still largely unknown whether the sound of a word in itself makes any contribution to the word’s meaning as perceived and interpreted by the listener. In a large-scale lexicon analysis, we focused on the affective substrates of words’ meaning (i.e. affective meaning) and words’ sound (i.e. affective sound); both being measured on a two-dimensional space of valence (ranging from pleasant to unpleasant) and arousal (ranging from calm to excited). We tested the hypothesis that the sound of a word possesses affective iconic characteristics that can implicitly influence listeners when evaluating the affective meaning of that word. The results show that a significant portion of the variance in affective meaning ratings of printed words depends on a number of spectral and temporal acoustic features extracted from these words after converting them to their spoken form (study1). In order to test the affective nature of this effect, we independently assessed the affective sound of these words using two different methods: through direct rating (study2a), and through acoustic models that we implemented based on pseudoword materials (study2b). In line with our hypothesis, the estimated contribution of words’ sound to ratings of words’ affective meaning was indeed associated with the affective sound of these words; with a stronger effect for arousal than for valence. Further analyses revealed crucial phonetic features potentially causing the effect of sound on meaning: For instance, words with short vowels, voiceless consonants, and hissing sibilants (as in ‘piss’) feel more arousing and negative. Our findings suggest that the process of meaning making is not solely determined by arbitrary mappings between formal aspects of words and concepts they refer to. Rather, even in silent reading, words’ acoustic profiles provide affective perceptual cues that language users may implicitly use to construct words’ overall meaning