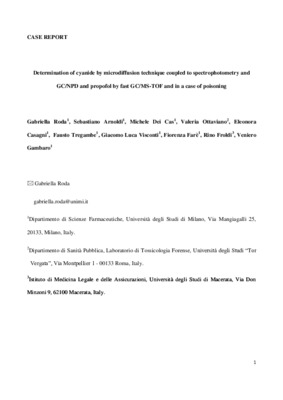 A man was found dead in a hotel located near Rome (Italy). The man was still holding a syringe attached to a butterfly needle inserted in his left forearm vein. The syringe contained a cloudy pinkish fluid. In the hotel room the Police found a broken propofol glass vial plus four sealed ones, an opened NaCl plastic vial and six more still sealed, and a number of packed smaller disposable syringes and needles. An opened plastic bottle containing a white crystalline powder labeled as potassium cyanide was also found. Systematic toxicological analysis (STA), carried out on blood, urine and bile, evidenced only the presence of propofol in blood and bile. So the validated L-L extraction protocol and the GC/MS-TOF method for the confirmation of propofol in the biological fluids optimized in our laboratory was applied to blood, urine and bile. The concentration of propofol resulted to be 0.432 \u3bcg/mL in blood and 0.786 \u3bcg/mL in bile. The quantitative determination of cyanide in blood was carried out by microdiffusion technique coupled to spectrophotometric detection obtaining a cyanide concentration of 5.3 \u3bcg/mL. The quantitative determination was then confirmed by GC/NPD and the concentration of cyanide resulted to be 5.5 \u3bcg/mL in blood and 1.7 \u3bcg/ mL in bile. Data emerging from autopsy findings, histopathological exams and the concentrations of cyanide suggested that death might be due to poisoning caused by cyanide, however, respiratory depression caused by propofol could not be excluded