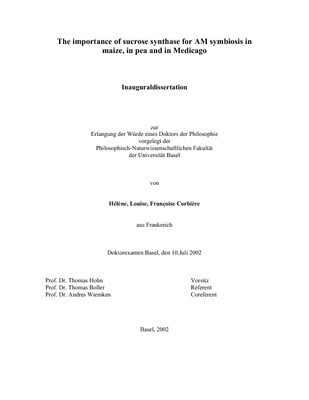 The importance of sucrose synthase for AM symbiosis in maize, in pea and in Medicago

The arbuscular mycorrhiza (AM) is probably the most widespread symbiotic associations on earth, occurring in the roots of about 90 % of the land plant species. The fungal partners are soil-borne fungi of the order Glomales in the phylum of Glomero. The first AM fossils were dated to the Ordovician (505-434 million years ago), soon after the separation of the major groups of terrestrial fungi (around 600 million years ago) and at the time when the first land plants appeared. The existence of mycorrhizal fossils from very early epochs and its prevalence over all the different symbioses between plants and fungi indicate an important role of the AM symbiosis in the evolution of life on earth. They penetrate into the host cortical cells, invaginating the plasma membrane, and form highly branched structures, so-called arbuscules. This symbiosis is mutually beneficial since the fungus profits of the plant’s photoassimilates and the plant of an increased supply of mineral nutrients provided by the fungus. Glucose is probably the main carbon compound taken up by the fungus at the plant-fungal interface but little is known about carbon metabolism in the AM symbiosis. In particular, the complex mechanisms of the carbon allocation from the host-plant to the fungus have not been elucidated so far. In the last fifteen years, the AM symbiosis was more and more studied because of its widespread occurrence in the plant kingdom, including many agronomical interesting plants. The diversity of vesicular-arbuscular mycorrhizae in soils has been shown to be a determining factor for maintain of biodiversity and ecosystem functioning. The AM symbiosis shares similarities and common pathways with the Rhizobium-legume interaction, another symbiosis of great interest for grain and forage legumes used in agriculture. In this thesis, after a thorough review on the current knowledge of the molecular aspects of AM symbiosis, an untargeted approach to find genes induced in this symbiosis is described. A reverse transcription-PCR differential display (RT-PCR-DD) was carried out in order to identify plant genes involved in an AM symbiosis, using as a model Medicago truncatula colonized by the AM fungus, Glomus intraradices. A clone encoding a putative sucrose synthase (MtSucS2) was identified, and its regulation was studied with regard to mycorrhiza and nodulation. The expression of the newly discovered gene encoding MtSucS2 was compared to the expression of a nodule–enhanced sucrose synthase (MtSucS1) that had been isolated earlier from Medicago. Interestingly, the two sucrose synthases displayed an inverse expression pattern in mycorrhizal roots. Compared to control roots, MtSucs1 expression was lower in mycorrhizal roots, but MtSucS2 was 4 fold induced in 6 weeks old roots infected by Glomus intraradices. The expression of MtSucS2 was a higher in fruits, flowers and nodules than in leaves, roots and stems. The induction of MtSucS2 seems to be particularly important in “special sink tissues” while MtSucS1 is predominant in stems, flowers and nodulated roots. Based on an in-situ analysis of mRNA expression, it is likely that the induction of MtSucS2 is in fact much higher in the arbuscule-containing cells. The role of sucrose synthase in AM symbiosis was investigated with the use of pea and maize mutants deficient in the sucrose synthase. Maize and pea lines affected in genes coding for sucrose synthase showed wild-type growth and development with regards to the plant phenotype but did not display a normal development of the symbiosis. In a time-course experiment, a reduction of AM colonization was observed in maize mutant plants compared to the wild-type plants. In particular, vesicle formation was strongly reduced. The results highlight the importance of sucrose synthase(s) for a normal development of the AM symbiosis. A model is presented to illustrate the role of sucrose synthase in AM symbiosis