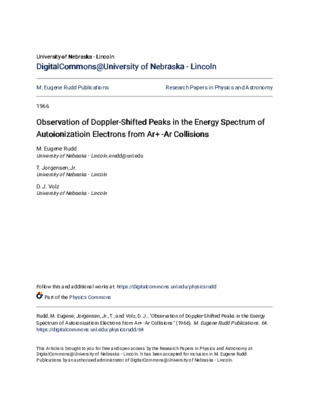 It is well known that when heavy ions traverse gas, electron pickup into excited states occurs. If the fast excited atom subsequently decays by radiating a photon, the energy of the photon will be Doppler shifted due to the motion of the source. This effect may be used to distinguish the radiation from stationary and moving atoms. For example, this method was used by Meinel to deduce the motion of solar protons streaming downward through the earth\u27s atmosphere. If instead the moving atom decays by autoionization, the ejected electron should also show a shift in energy analogous to the Doppler shift. We have now observed this effect in the autoionization electron spectrum from Ar+-Ar collisions at 50 to 150 keV. Viewing the electrons ejected in a nearly backward direction (160°) relative to the beam of ions, we have found a number of characteristic peaks which shift with beam energy and a number of others which do not. Furthermore, there is a detailed correspondence between the shifted and unshifted sets. The latter sets come from the (nearly) stationary target atoms, while the shifted electrons are from the fast beam particles