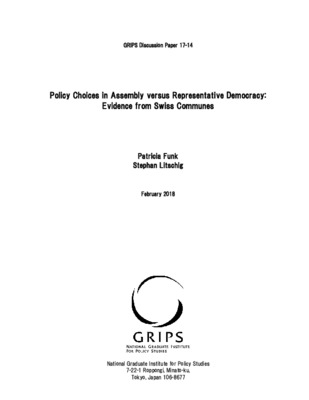 By FUNK Patricia and LITSCHIG Stephan
Get PDF (2 MB)

This paper investigates whether the form of the legislative institution - assembly versus parliament - affects the level and composition of local public expenditure. We use two research designs in distinct samples of Swiss communes. Our event study analysis focuses on medium-sized and mostly German-speaking communes that switched from assembly to parliament from 1945 to 2010. The regression discontinuity analysis is based on small communes from a French-speaking canton over the period 1986-2005 and exploits a cutoff in local population. Event study estimates suggest that parliament adoption increases total spending by about 6 percent and that this increase is driven mostly by general administration and education spending. In contrast, regression discontinuity estimates are too noisy to be informative. To understand the mechanism at play, we run a survey among assembly participants and document a sizeable under-representation of 20- to 40-year-olds as well as of women in assemblies compared to both the electorate and to voters. Switching from assembly democracy to parliament in our setting therefore seems to increase the representation of two demographics that are known for their relatively strong preferences for education spending.The authors gratefully acknowledge financial support from the Swiss National Science Foundation (Sinergia grant 130648), the Fundació Caixa Manresa and the Severo Ochoa Programme for Centres of Excellence in R&D (SEV-2011-0075).http://www.grips.ac.jp/list/jp/facultyinfo/litschig-stephan/http://doi.org/10.24545/00001576http://id.nii.ac.jp/1295/00001718