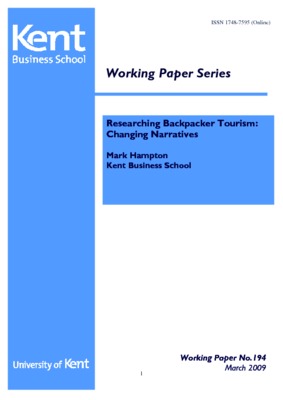 This paper interweaves my own personal narrative as a former backpacker with the way in which the phenomenon, and how it has been researched, has continued to evolve over recent years and so it takes the form of an explicitly reflective academic journey. In this it has some similarities to autoethnography where the writer metaphorically steps into the text. The paper has four main parts covering the last twenty or so years in approximately chronological order. The first part explores my own experiences on two major trips to Asia as a backpacker. The second part discusses the ‘academic tourist’ through the prism of several research trips to South East Asia as a researcher doing fieldwork (published as Hampton 1998; 2003; 2005,and discussed in Hamzah and Hampton 2007; Hampton and Hamzah, 2008). The third section explores what could be called way markers on the journey, that is, emerging issues as backpacker tourism (and perhaps its nature) changes over time. The paper concludes with reflections on the possible academic journey ahead, and makes some suggestions for further academic research concerning trends towards the massification but also the fragmentation of the backpacker market. Travelling, journeys, mobilities, personal stories and narrative, both grand and immediate: these are the metaphors that run through this paper