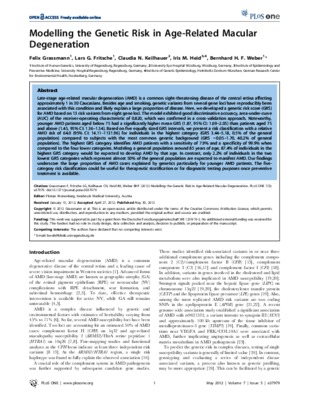 Late-stage age-related macular degeneration (AMD) is a common sight-threatening disease of the central retina affecting approximately 1 in 30 Caucasians. Besides age and smoking, genetic variants from several gene loci have reproducibly been associated with this condition and likely explain a large proportion of disease. Here, we developed a genetic risk score (GRS) for AMD based on 13 risk variants from eight gene loci. The model exhibited good discriminative accuracy, area-under-curve (AUC) of the receiver-operating characteristic of 0.820, which was confirmed in a cross-validation approach. Noteworthy, younger AMD patients aged below 75 had a significantly higher mean GRS (1.87, 95% CI: 1.69–2.05) than patients aged 75 and above (1.45, 95% CI: 1.36–1.54). Based on five equally sized GRS intervals, we present a risk classification with a relative AMD risk of 64.0 (95% CI: 14.11–1131.96) for individuals in the highest category (GRS 3.44–5.18, 0.5% of the general population) compared to subjects with the most common genetic background (GRS −0.05–1.70, 40.2% of general population). The highest GRS category identifies AMD patients with a sensitivity of 7.9% and a specificity of 99.9% when compared to the four lower categories. Modeling a general population around 85 years of age, 87.4% of individuals in the highest GRS category would be expected to develop AMD by that age. In contrast, only 2.2% of individuals in the two lowest GRS categories which represent almost 50% of the general population are expected to manifest AMD. Our findings underscore the large proportion of AMD cases explained by genetics particularly for younger AMD patients. The five-category risk classification could be useful for therapeutic stratification or for diagnostic testing purposes once preventive treatment is available