Since 2001, the Indonesian government has issued natural gas master plans annually holding the planned gas infrastructure developments in order to motivate private parties who are not motivated due to the lack of the gas infrastructure increase. Since 2002, there were only three segments of gas pipelines that have been tendered (IEA, 2008) which are Gresik-Semarang and Bontang-Semarang (Kalimantan to Java Pipeline) in 2005, and Cirebon-Semarang in 2006 that have no supply anymore. The current transmission and distribution lines of 3,762.32 km and 4,554.54 km, respectively, are very small compared to developed countries in a similar gas resource position as Indonesia. The paper views the role of natural gas infrastructure for economic growth and energy security in Indonesia. The economic impacts of natural gas infrastructure are analyzed through the Computable General Equilibrium model. The results show that all financing scenarios have positive impacts on the various macro-economic indicators as well as on sectorial output and employment 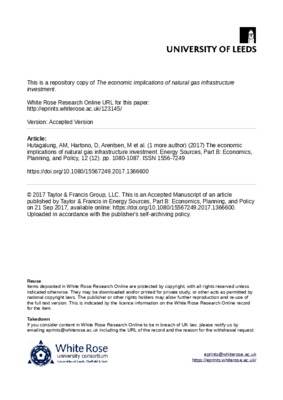 This paper was published in White Rose Research Online.