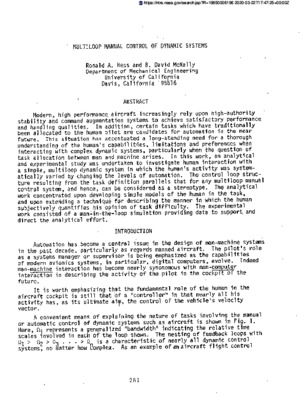 Human interaction with a simple, multiloop dynamic system in which the human's activity was systematically varied by changing the levels of automation was studied. The control loop structure resulting from the task definition parallels that for any multiloop manual control system, is considered a sterotype. Simple models of the human in the task, and upon extending a technique for describing the manner in which the human subjectively quantifies his opinion of task difficulty were developed. A man in the loop simulation which provides data to support and direct the analytical effort is presented