Stiffness Analysis of the Tethered Coulomb Structure Concept and Application

This thesis investigates the Tethered Coulomb Structure (TCS) concept and its operating regime for creating large space structures and for providing satellite situational awareness. A TCS consists of a three-dimensional tethered spacecraft formation that uses electrostatic forces to repel the spacecraft and inflate the formation to a semi-rigid structure. The influential force modeling and equations of motion are given. Numerical simulations of a two-node TCS show that TCS systems have the greatest translational and rotational stiffness when the nodes have high voltage, low separation distance and low mass. Single tether two node TCS at 30 kV with 5 m separation are shown to withstand up to 50 deg/min initial rotations before reaching an entangled state. Multiple tether TCS simulations demonstrate that additional tethers between TCS nodes provides full three-dimensional stiffness and reduces the maximum absolute rotation for the system due to an initial perturbation. Using a double- or triple-tether TCS increases the maximum allowable initial rotation by 40-60%. Orbital perturbations, differential gravity and solar radiation pressure, are examined and it is demonstrated that both can be considered negligible for this study. A TCS configuration where one small spacecraft is tethered to a large spacecraft in orbit is presented. Simulations using a simple attitude control law show that a TCS in this configuration can be used to hold the smaller craft at a relatively fixed arbitrary position and rotation relative to the larger craft. Using multiple tethers for this configuration allows for separation distances of up to 10 m with less than 5 deg and 1 cm relative rotation and translation, respectively 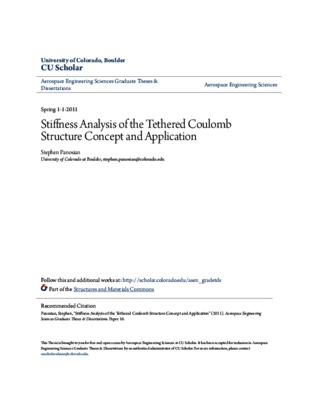