Improving selectivity in catalytic systems is of primary interest to a number of fields. One means of achieving selectivity is through the use of promoters, or deposited materials that improve catalytic properties. Here, we present the modification of palladium surfaces with self-assembled monolayers (SAMs) formed from thiols. SAM coatings are employed in two systems: metal-insulator-semiconductor (MIS) sensors and supported palladium catalysts. On MIS sensors, modification with alkanethiol SAMs results in enhanced sensitivity to acetylene. Excellent selectivity for acetylene over ethylene is also observed. The functionalized sensors would serve as excellent acetylene detectors in a variety of applications including the detection of fault gases in transformers and detecting trace acetylene in ethylene production plants. Supported palladium catalysts were modified with SAM coatings for the selective reduction of 1-epoxy-3-butene (EpB) to 1-epoxybutane. Aside from having significant relevance for the production of value added chemicals, this reaction serves as an excellent probe for the conversion of unsaturated oxygenates derived from biomass and it is difficult to achieve high selectivity over conventional catalysts. Experiments probing the mechanism for the enhancement observed in sensors and catalysts showed increasing order of the SAM coating results in increasing sensor response or catalyst activity. By varying the chemical composition of the thiols used to create SAMs and by comparing these coatings to surface sulfur, we uncovered that surface sulfur is largely responsible for the enhancement of these devices. However, the hydrocarbon tails of thiols play an important role in controlling surface order. The reaction of EpB on coated and uncoated palladium surfaces was studied in more detail using temperature programmed desorption and high resolution electron energy loss spectroscopy on model systems in ultra-high vacuum. These experiments showed that on clean palladium, EpB ring opens to form an aldehyde-like intermediate; however, on surfaces coated with SAMs no ring opening is observed. Comparing the desorption energy of EpB to similar molecules suggests it binds through its olefin functionality, and comparing the desorption spectra at different surface coverages on coated surfaces suggests less well-ordered self-assembled monolayers decrease activity by preventing adsorption in active sites 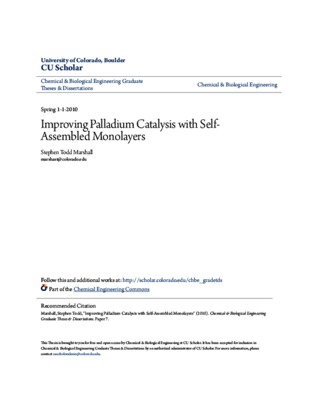