1.The judicial system in the nations is generally considered as an important public institution to promote the liberty and social justice. The role and influence of public policy and administration can hold a considerable power in the shaping of Korean judicial system. The current literature in this field is just on legal theory, and little is known about the processes, actions and interactions of players relating with the elements of public policy studies. 2. The study’s purposes were: (a) to examine the phenomenon inherent in the public administration of Korean judicial system (b) to generate a theory on its phenotype in the national and comparative or interdisciplinary viewpoints. 3. Based on the grounded theory approach as well as hermeneutics and heuristics, the kind of tools, i.e., concepts, terms, essences as well as inter-relational understanding or themes were employed. The theories and tenets generally on the elements of public policy, as stems from Sabatier & Mooney, Walzer, Habermas & Foucault, Weber &Turner, Simons, Bourdieu and so, provided the backdrop for this study. 4. Research questions focused on the policy process and actions, interactions of players within the public policy aspect of Korean judicial system and its phenotype in terms of national and comparative or interdisciplinary viewpoints. 5. Research participants consisted of a purposive sample of 30 Korean lawyers, legal historians, law professors and civic leadership who responded with the individual in-depth interviews. They were preliminarily surveyed with the written questions leading to select major occurrences or events, and deeply investigated through the interviews at next. The data collection consisted of public documentation, record, personal writings, and texts of Korean source 6. The findings indicated that the public administration of Korean judicial system in view of public policy elements is (i) unique, but sharable (ii) inevitable, but struggled, (iii) static, but transformative (iv) general, but professional. 7. Implications for positive social change include deeper understanding of Korean judicial system in terms of public policy studies and importance of public policy on its shaping 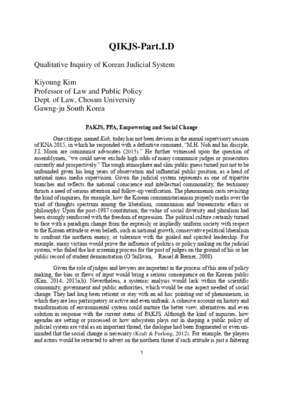