Since our start 10 years ago, we collected 242M scientific outputs along with 30M hosted documents bringing open science to everyone. None of this was achieved in a moment, but we have worked hard over the last 10 years. We are happy to share the story of us. 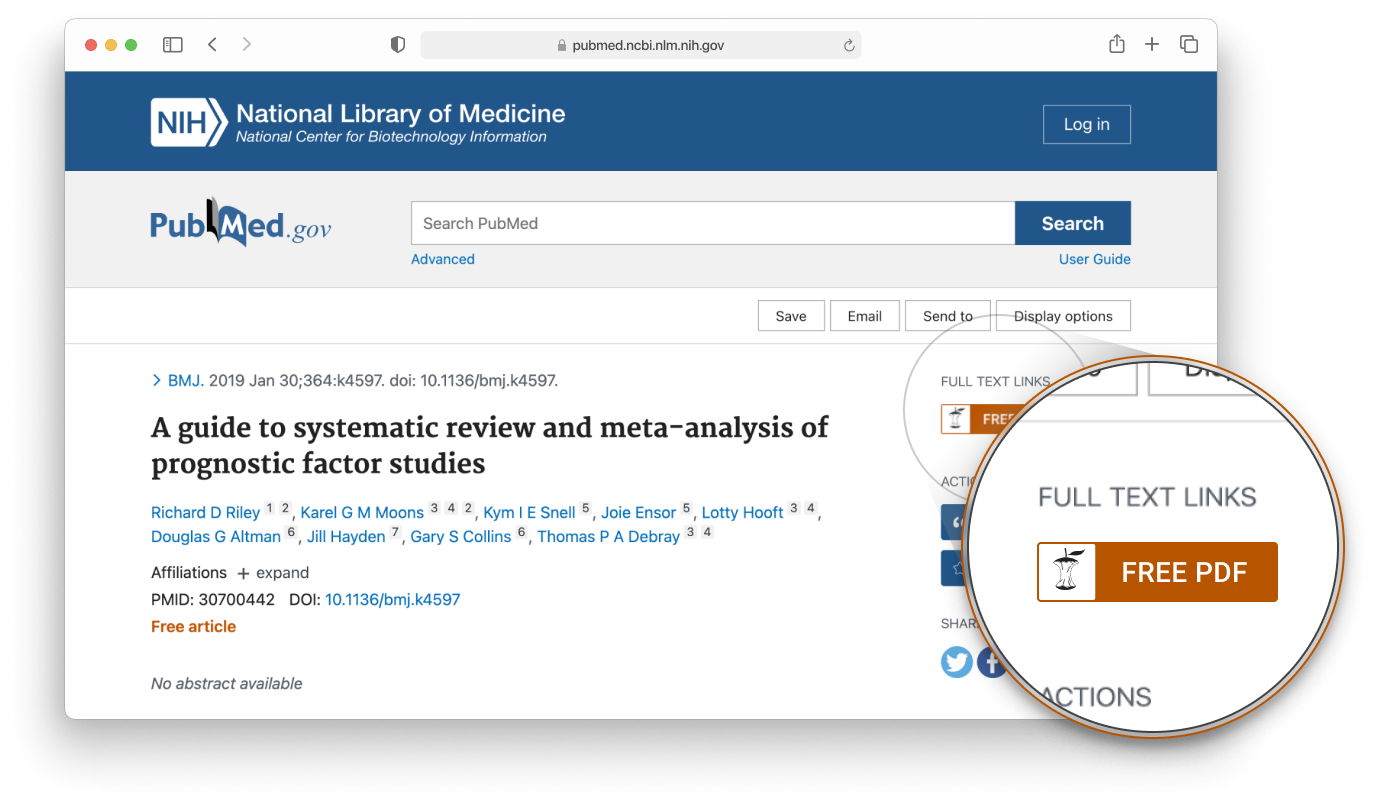 This development now enables PubMed users to access full text links to articles hosted in CORE via its LinkOut service, providing researchers with a direct route to the research. The linking of CORE papers directly from PubMed resources and other related databases further increases the discoverability of content aggregated by CORE, providing a valuable service to our repositories.

CORE provides access to freely available full text papers which were previously unavailable in PubMed to enhance the experience of its users. 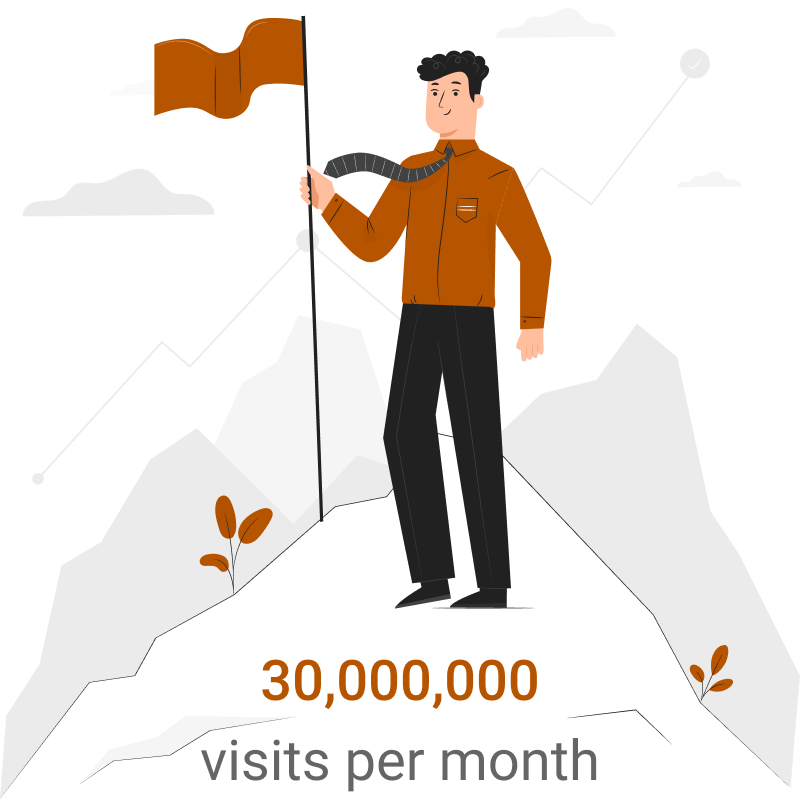 As of November 1, 2020, CORE is listed among the top 2,000 websites by user engagement, calculated from a combination of daily visitors and page views on a website over the last 90 days. In the beginning of December, CORE achieved 1,528 positions on the rank.

This follows already significant growth of CORE’s user base in 2020, as we only reported achieving 20 million monthly users in June 2020 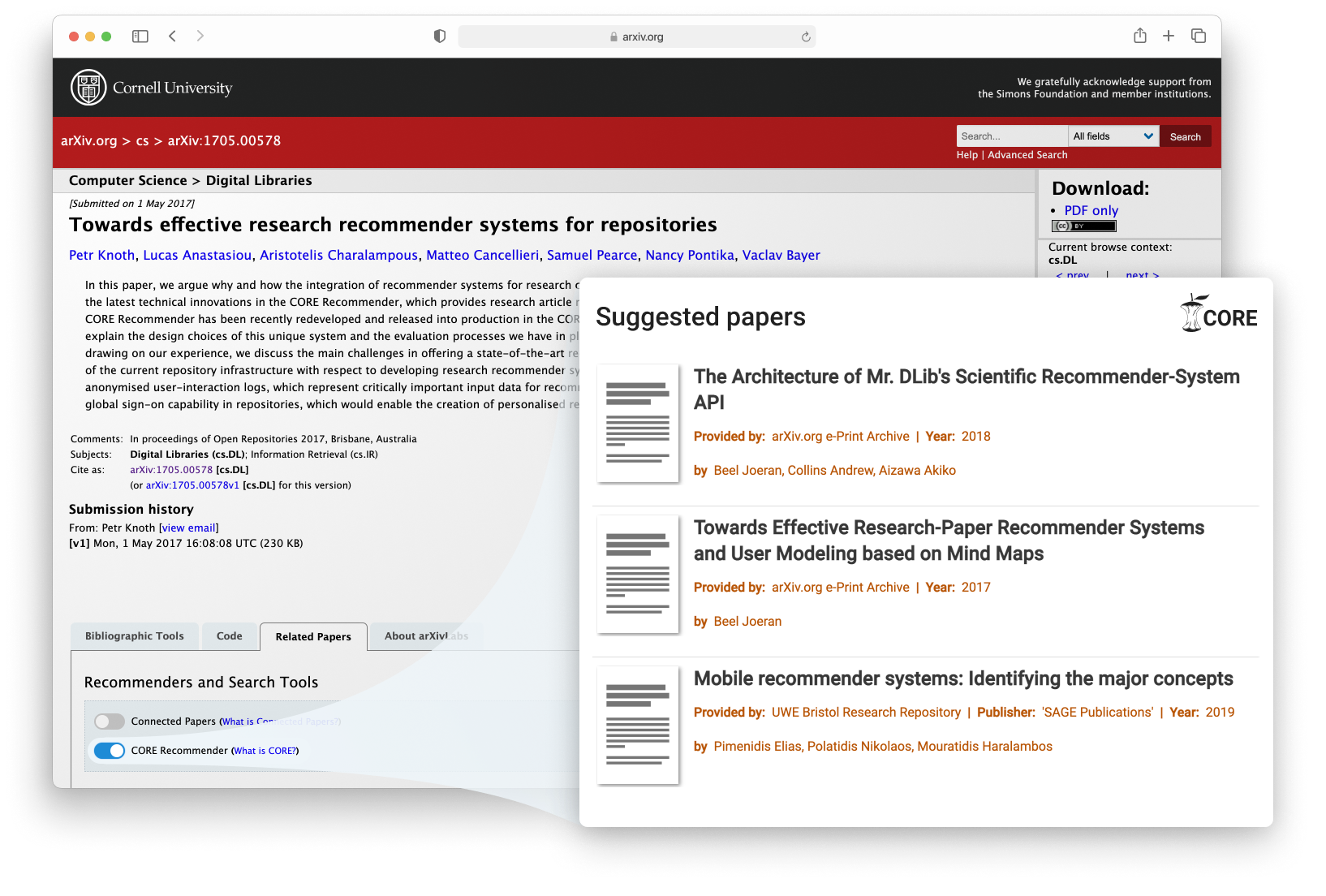 To generate a list of recommended works, the tool utilizes an algorithm based on the article’s full text and metadata, including title, authors, and abstract. The suggestions come both from arXiv and other resources in the CORE collection, and as many as five articles with freely accessible full texts might be recommended

arXiv readers now have a faster way to find articles relevant to their interests. 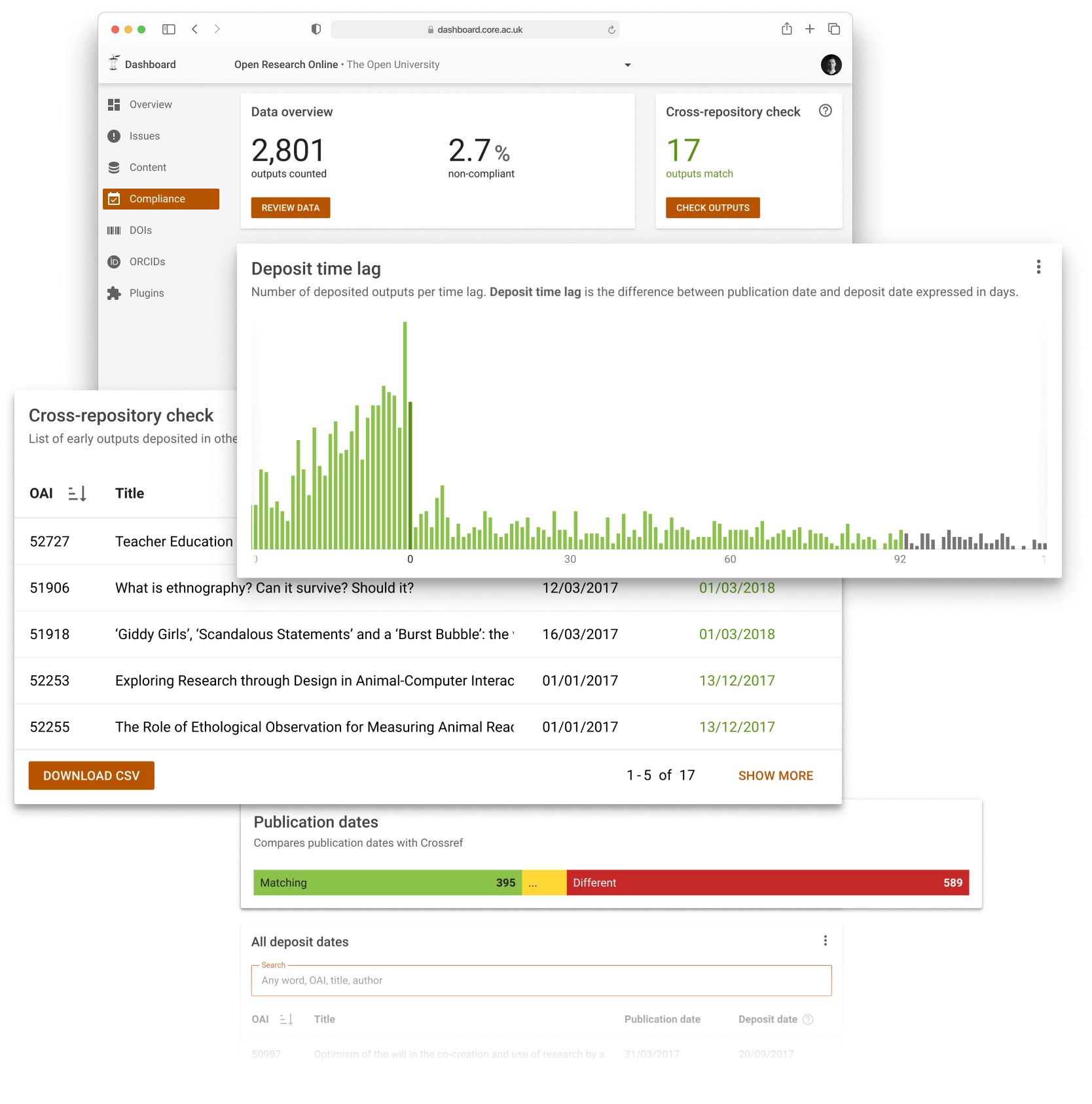 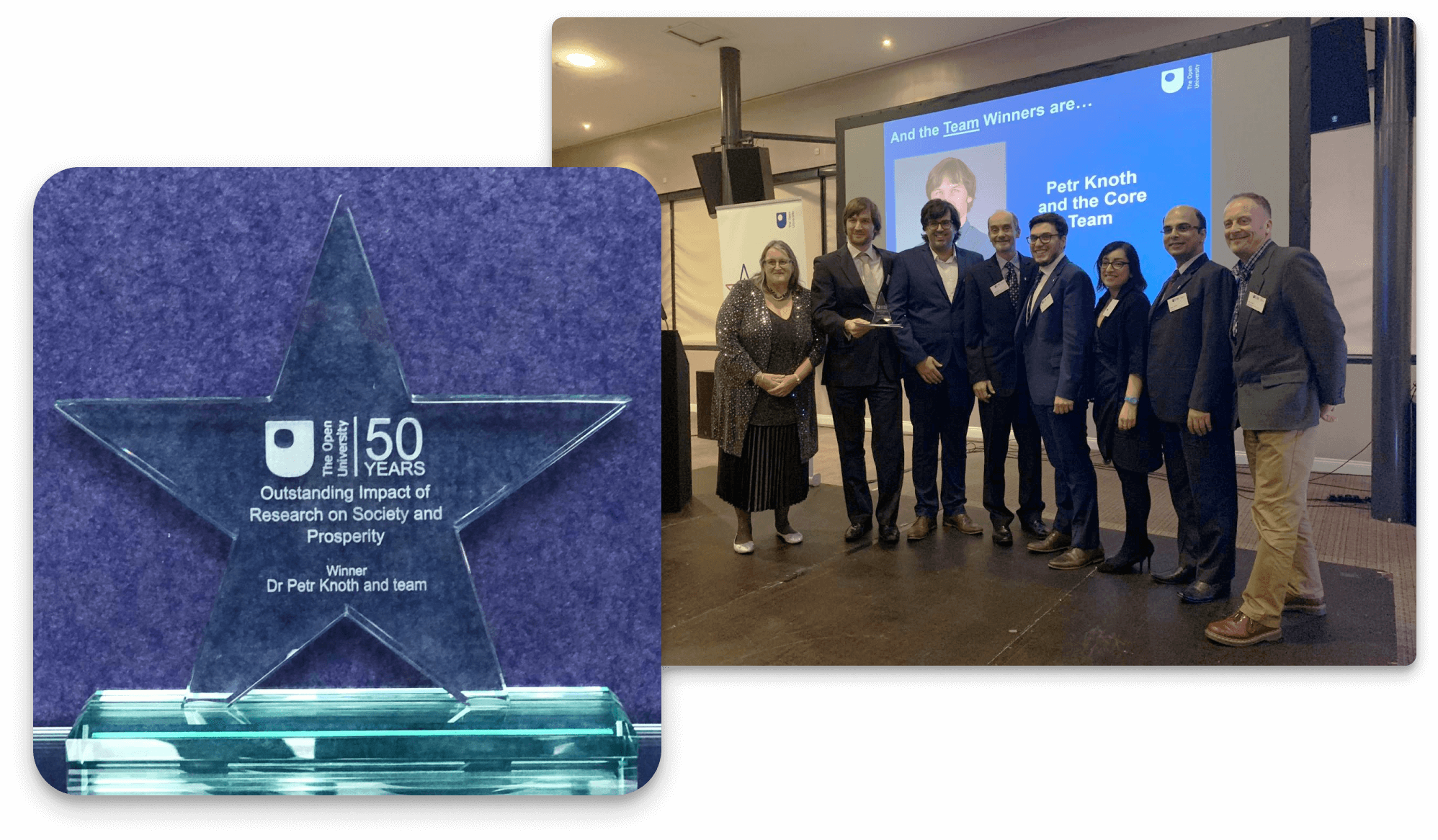 Award for Outstanding Impact of Research on Society and Prosperity

CORE is continuing to grow both its content, user-base and range of services. With now close to 14 million full texts and 135 million metadata items from about 10,000 providers, CORE aims to facilitate free, unrestricted access to research for all.

CORE update for October to December 2019

During the Research Excellence Awards 2019 Ceremony dedicated to the 50th anniversary of The Open University, CORE was presented with the award for “Outstanding Impact of Research on Society and Prosperity Award”. 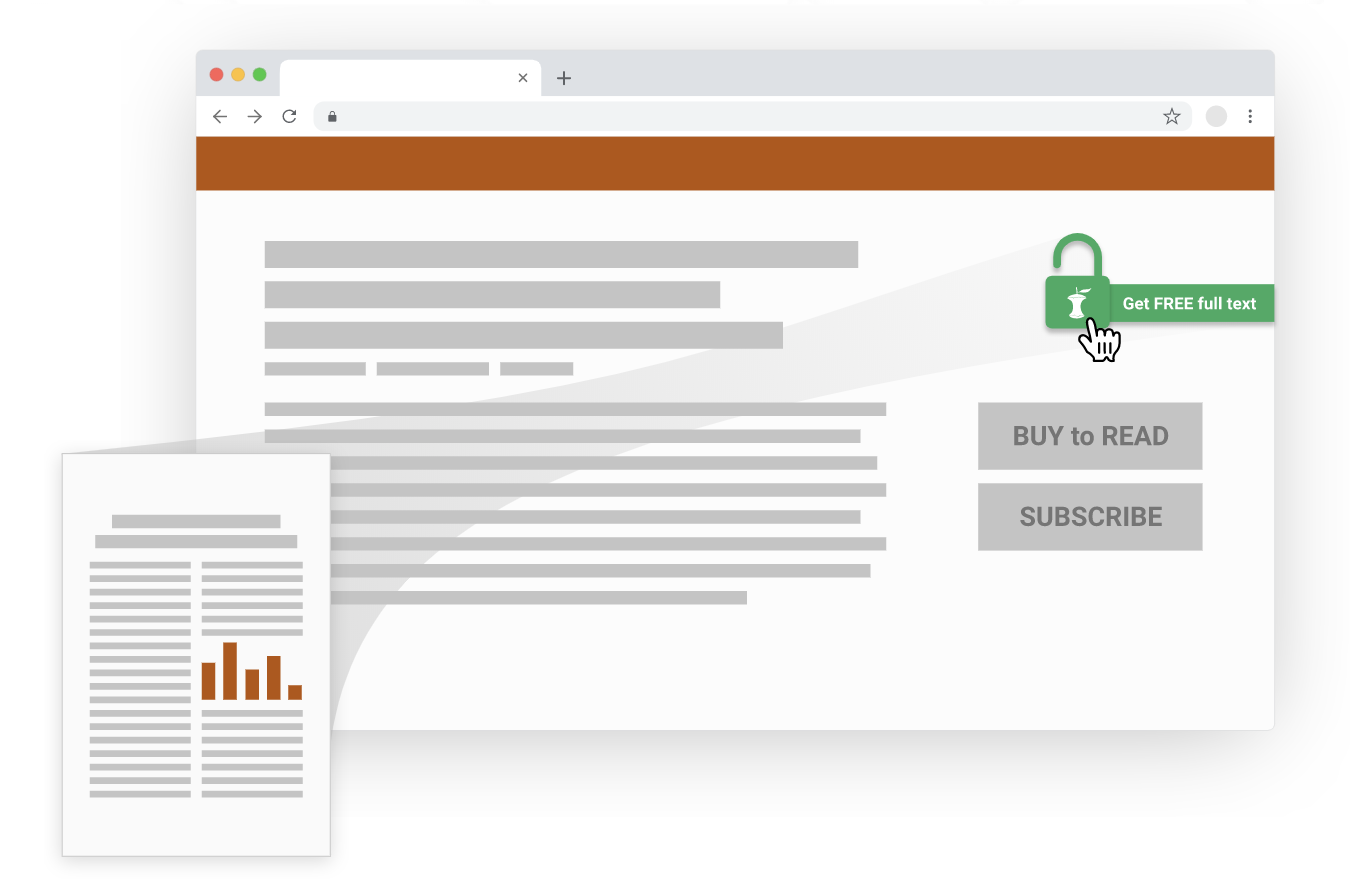 CORE update for April to June 2019

CORE has released a BETA version of the CORE Discovery tool, which offers a one-click access to free copies of research papers whenever you might hit a paywall.

CORE announced to be used in REF 2021

Research England announces to use CORE for the REF 2021 Open Access audit. This is motivated by our research study Do Authors Deposit on Time? Tracking Open Access Policy Compliance.

In June 2019, Research England released REF Audit Guidance which states that CORE data will be used in the REF 2021 Open Access Policy Audit.

This was another productive year for the CORE team; our content providers have increased, along with our metadata and full text records.

This month we have reached 75 million metadata and 6 million full of text scientific research articles harvested from both open access journals and repositories.

The Repository Dashboard is launched. It initially provides an online interface for repositories and content providers to manage harvesting. However, the functionality is regularly updated.

An infrastructure to increase collaboration of Aggregators with Open Repositories.

A series of small grants and engagements eventually leads to the CORE team landing a multiyear national open access aggregator service contract with Jisc. CORE joins the Jisc Open Access Services portfolio, but the team delivering CORE stays at the Open University, in a bilateral agreement of Jisc with the Open University in which both institutions commit to supporting CORE.

From a technical perspective, this enables CORE to develop its services along the Service Oriented Architecture (SOA) paradigm and put in place the required hardware for the service provision.

In June 2013, Jisc invited in a closed tender selected teams to bid for the UK National Open Access aggregator. 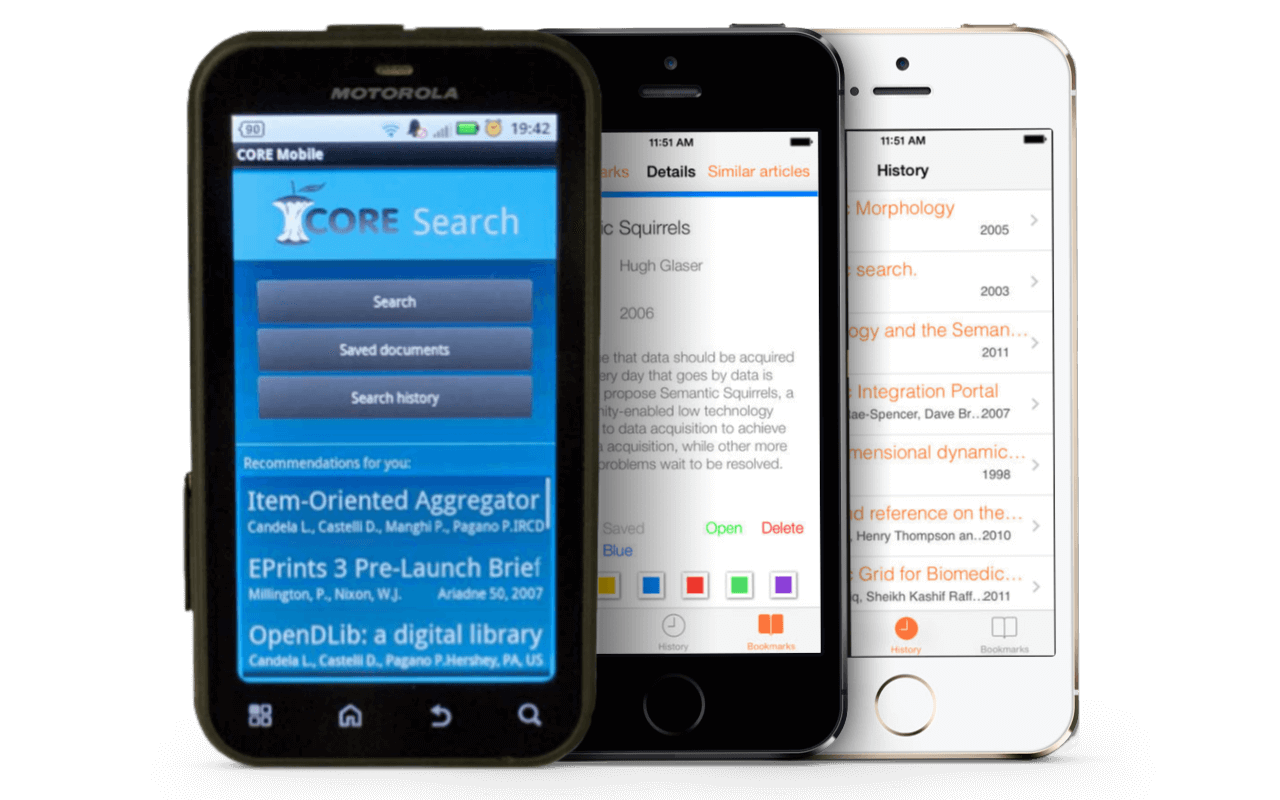 First release of a mobile application for Android.

We have developed a mobile application for the Android system that allows navigating and downloading content harvested from Open Access repositories. 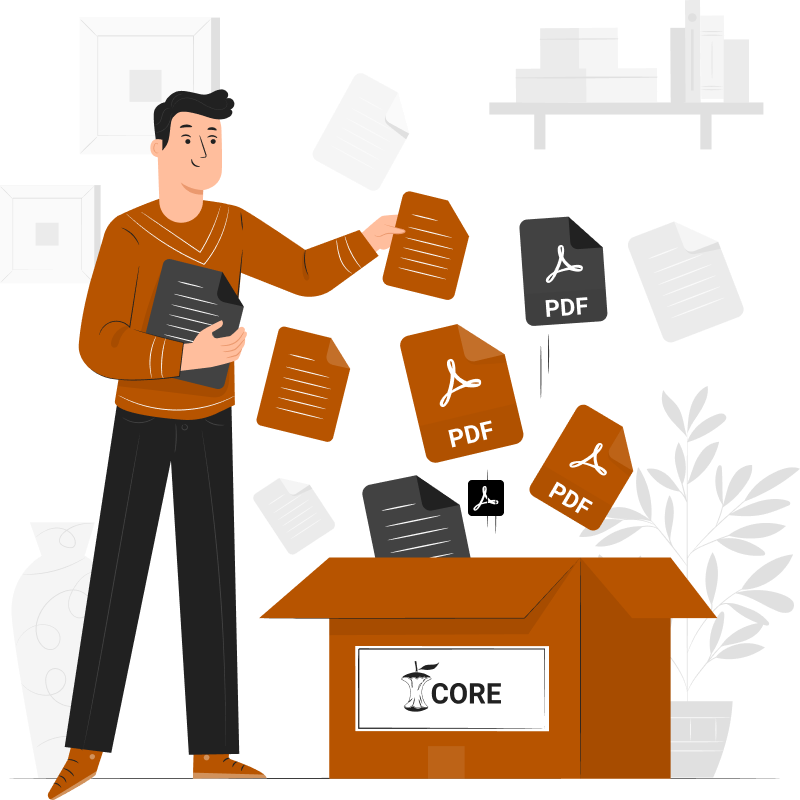 Another grant brings a 2 year stability

A new research grant called DiggiCORE provides a necessary degree of stability for the development of CORE and allows expanding and improving the technology.

This is the time when CORE manages to scale out its functionality to harvest, process and analyse not just metadata of open access research papers but their full texts too. This processing of full texts becomes a defining feature of CORE, connecting full text research papers from across repositories globally. It is a clear response to the need of going beyond poor quality metadata only silos on which it is hardly possible to develop engaging services.

The subsequent development of the CORE system will be achieved through two new projects.

From a national aggregator to a worldwide aggregator

Petr Knoth secures a new grant running for 9 months with the objective of developing a UK nationwide aggregation service for research publications scattered across institutional repositories. The potential of the system is demonstrated through the development of 5 services on top of the aggregation system: CORE Portal (with search), CORE Mobile, CORE Recommender and CORE API.

The project again over-delivers, resulting not just in the aggregation of the vast majority of the UK repositories but quickly expanding, both technically and strategically, to aggregated research outputs from institutional repositories aggregated globally. 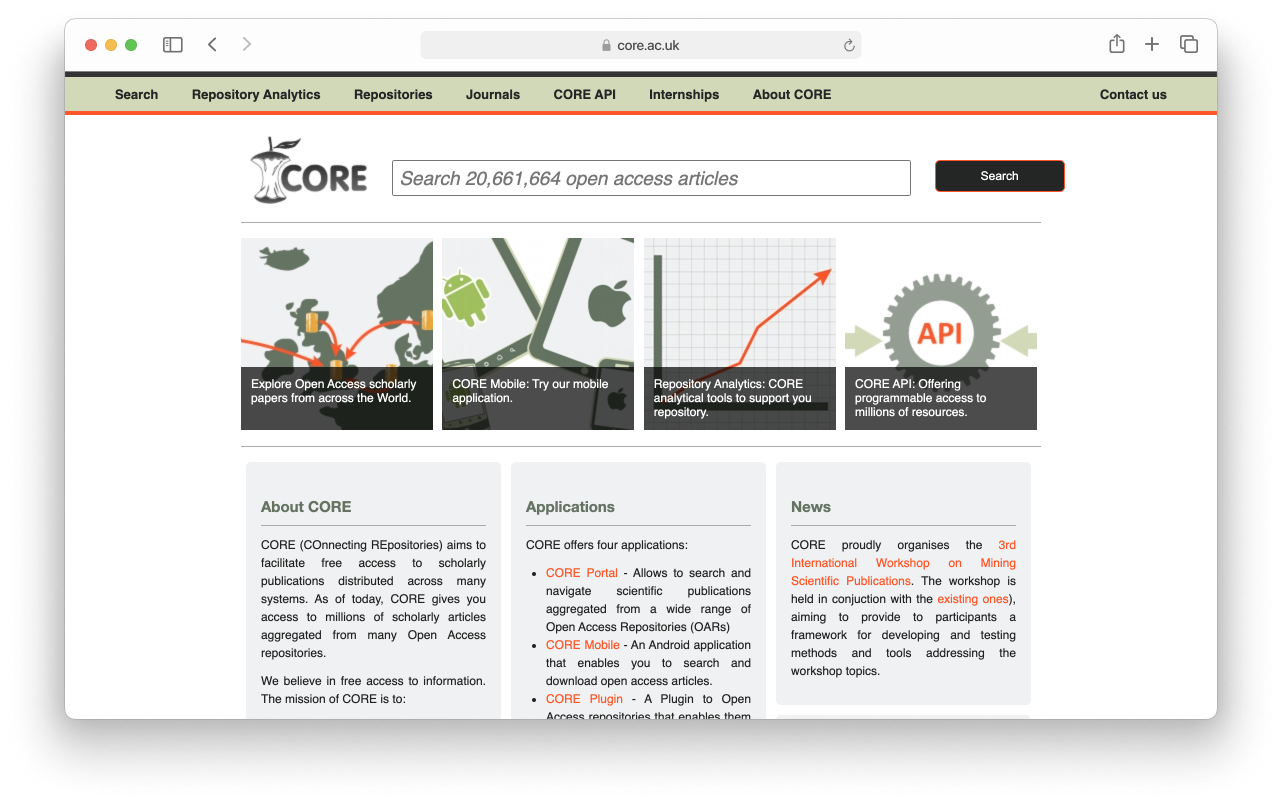 The first grant for CORE is awarded by Jisc in January and the project commences on 1st February 2011, initiating a long-term collaboration of the Open University and Jisc (which is not yet known at this time). CORE embarks on a mission to facilitate free, unrestricted access to research for all.

CORE’s initial goal is to connect 20 repositories and provide a recommendation system for their papers.

One of the project’s achievements is the integration of the CORE Plugin (later called CORE Recommender) into the Open University’s repository, Open Research Online. This is the first adopter with hundreds more to follow in the future.

The project over-delivers, developing an aggregation engine for over 60 repositories, a recommender system, linked open data module and search and web UI. The funder (Jisc) is impressed, paving the way for new opportunities. 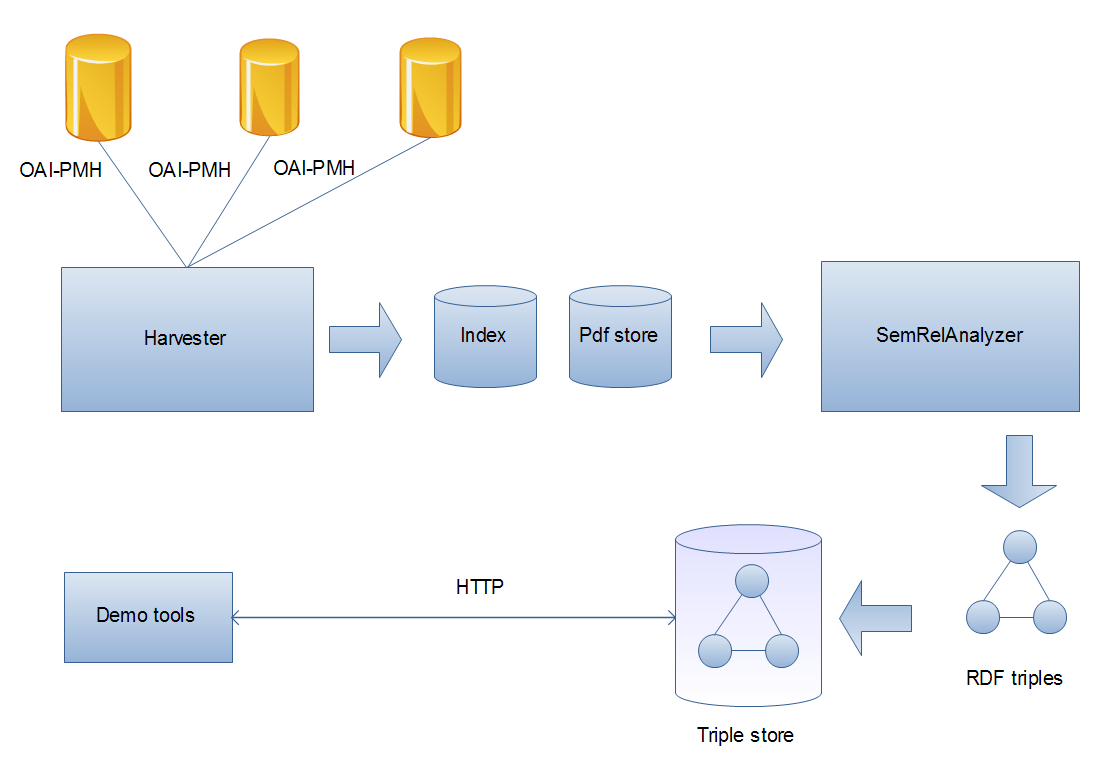 Petr Knoth writes an application for the first grant for his idea. He is asking for an initial seed of £40k which will fund his project for 6 months. The CORE (COnnecting REpositories) brand is born.

Aims, objectives and final outputs of the project

Petr Knoth comes up with the idea of aggregating research papers as part of his doctoral work at the Knowledge media institute, The Open University. He recognises that research papers are scattered across many systems limiting their reuse potential. He is motivated by the opportunity to connect repositories by aggregating open access papers so that research papers can be text-mined, enabling the development of innovative technologies for information access. He becomes a strong supporter of the open access movement and open access repositories, wanting to see democratisation of knowledge generated using tax-payers’ money.