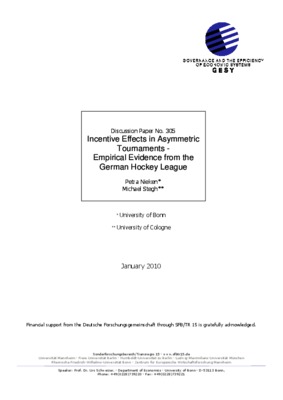 By Petra Nieken and Michael Stegh
Get PDF (0 MB)

Following tournament theory, incentives will be rather low if the contestants of a tournament are heterogeneous. We empirically test this prediction using a large dataset from the German Hockey League. Our results show that indeed the intensity of a game is lower if the teams are more heterogeneous. This effect can be observed for the game as a whole as well as for the ?rst and last third. When dividing the teams in the dataset into favorites and underdogs, we only observe a reduction of effort provision from favorite teams. As the number of games per team changes between different seasons, we can also investigate the effect of a changing spread between winner and loser prize. In line with theory, teams reduce effort if the spread declines. Interestingly, effort is also sensitive to the total number of teams in the league even if the price spread remains unchanged.Tournaments; Heterogeneity; Incentives;Effort