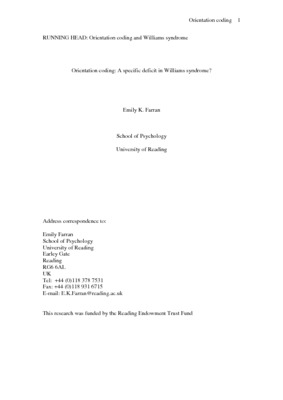 Williams syndrome (WS) is a rare genetic disorder with a unique cognitive profile in which verbal abilities are markedly stronger than visuo-spatial abilities. The present study investigates the claim that orientation coding is a specific deficit within the visuo-spatial domain in WS. Experiment 1 employed a simplified version of the Benton Judgement of Line Orientation task, and a control, length matching task. Results demonstrated comparable levels of orientation matching performance in the WS group and a group of typically developing controls matched by non-verbal ability, although it is possible that floor effects masked group differences. A group difference was observed in the length matching task due to stronger performance from the control group. Experiment 2 employed an orientation discrimination task and a length discrimination task. Contrary to previous reports, the results showed that individuals with WS were able to code by orientation to a comparable level as their matched controls. This demonstrates that, although some impairment is apparent, orientation coding does not represent a specific deficit in WS. Comparison between Experiments 1 and 2 suggest that orientation coding is vulnerable to task complexity. However, once again, this vulnerability does not appear to be specific to the WS population, as it is also apparent in the TD controls