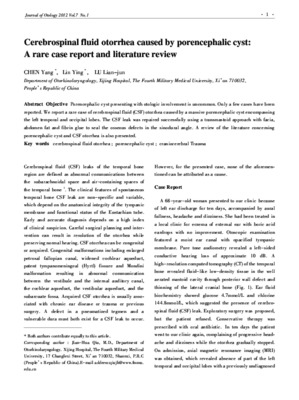 AbstractObjectivePorencephalic cyst presenting with otologic involvement is uncommon. Only a few cases have been reported. We report a rare case of cerebrospinal fluid (CSF) otorrhea caused by a massive porencephalic cyst encompassing the left temporal and occipital lobes. The CSF leak was repaired successfully using a transmastoid approach with facia, abdomen fat and fibrin glue to seal the osseous defects in the sinodural angle. A review of the literature concerning porencephalic cyst and CSF otorrhea is also presented