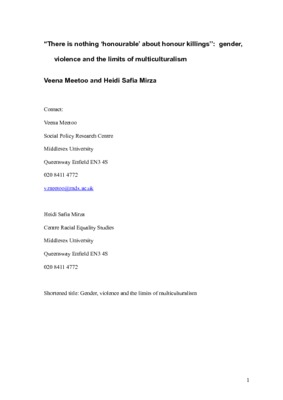 There is nothing honourable about honour killings: gender, violence and the limits of multiculturalism

By Veena Meetoo and Heidi Mirza
Get PDF (252 KB)

'Honour killings' are extreme acts of domestic violence culminating in the murder of a woman by her family or community. However only in relation to religious and ethnic communities is the concept of 'honour' invoked as motivation for domestic violence. In this paper we argue that ethnicised women are caught up in a collision of discourses. Women who are victims of honour killings are invisible within the cultural relativism of the British multicultural discourse and the private/public divide which characterises the domestic violence discourse. But since September 11, while ethnicised women have become highly visible, they are now contained and constructed in the public consciousness within a discourse of fear and risk posed by the presence of the Muslim alien 'other'. By developing an effective human rights approach to honour killings it could be possible to move away from the 'gender trap' of cultural relativism within the liberal democratic discourse on multiculturalism