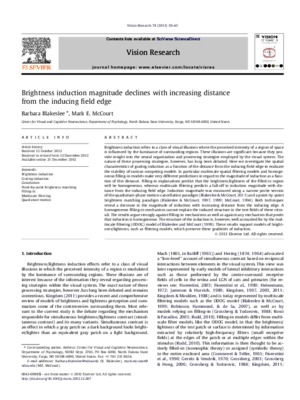 By Barbara Blakeslee and Mark E. McCourt
Get PDF (821 KB)

AbstractBrightness induction refers to a class of visual illusions where the perceived intensity of a region of space is influenced by the luminance of surrounding regions. These illusions are significant because they provide insight into the neural organization and processing strategies employed by the visual system. The nature of these processing strategies, however, has long been debated. Here we investigate the spatial characteristics of grating induction as a function of the distance from the inducing field edge to evaluate the viability of various competing models. In particular multiscale spatial filtering models and homogeneous filling-in models make very different predictions in regard to the magnitude of induction as a function of this distance. Filling-in explanations predict that the brightness/lightness of the filled-in region will be homogeneous, whereas multiscale filtering predicts a fall-off in induction magnitude with distance from the inducing field edge. Induction magnitude was measured using a narrow probe version of the quadrature-phase motion-cancellation paradigm (Blakeslee & McCourt, 2011) and a point-by-point brightness matching paradigm (Blakeslee & McCourt, 1997, 1999; McCourt, 1994). Both techniques reveal a decrease in the magnitude of induction with increasing distance from the inducing edge. A homogeneous filling-in mechanism cannot explain the induced structure in the test fields of these stimuli. The results argue strongly against filling-in mechanisms as well as against any mechanism that posits that induction is homogeneous. The structure of the induction is, however, well accounted for by the multiscale filtering (ODOG) model of Blakeslee and McCourt (1999). These results support models of brightness/lightness, such as filtering models, which preserve these gradients of induction