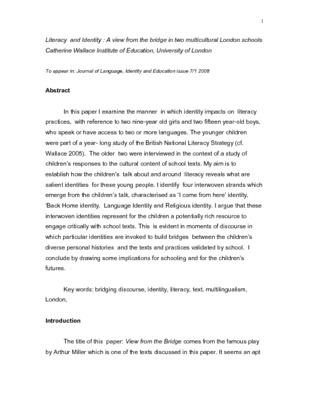 Literacy and Identity: A View from the Bridge in two Multicultural London Schools

By Catherine Wallace
Get PDF (193 KB)

In this paper I examine the manner in which identity impacts on literacy practices, with reference to two nine-year old girls and two fifteen year-old boys, who speak or have access to two or more languages. The younger children were part of a year- long study of the British National Literacy Strategy (cf. Wallace 2005). The older two were interviewed in the context of a study of children’s responses to the cultural content of school texts. My aim is to establish how the children’s talk about and around literacy reveals what are salient identities for these young people. I identify four interwoven strands which emerge from the children’s talk, characterised as ‘I come from here’ identity, ‘Back Home identity, Language Identity and Religious identity. I argue that these interwoven identities represent for the children a potentially rich resource to engage critically with school texts. This is evident in moments of discourse in which particular identities are invoked to build bridges between the children’s diverse personal histories and the texts and practices validated by school. I conclude by drawing some implications for schooling and for the children’s futures