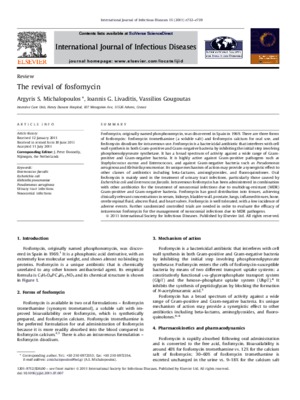 The revival of fosfomycin

SummaryFosfomycin, originally named phosphonomycin, was discovered in Spain in 1969. There are three forms of fosfomycin: fosfomycin tromethamine (a soluble salt) and fosfomycin calcium for oral use, and fosfomycin disodium for intravenous use. Fosfomycin is a bactericidal antibiotic that interferes with cell wall synthesis in both Gram-positive and Gram-negative bacteria by inhibiting the initial step involving phosphoenolpyruvate synthetase. It has a broad spectrum of activity against a wide range of Gram-positive and Gram-negative bacteria. It is highly active against Gram-positive pathogens such as Staphylococcus aureus and Enterococcus, and against Gram-negative bacteria such as Pseudomonas aeruginosa and Klebsiella pneumoniae. Its unique mechanism of action may provide a synergistic effect to other classes of antibiotics including beta-lactams, aminoglycosides, and fluoroquinolones. Oral fosfomycin is mainly used in the treatment of urinary tract infections, particularly those caused by Escherichia coli and Enterococcus faecalis. Intravenous fosfomycin has been administered in combination with other antibiotics for the treatment of nosocomial infections due to multidrug-resistant (MDR) Gram-positive and Gram-negative bacteria. Fosfomycin has good distribution into tissues, achieving clinically relevant concentrations in serum, kidneys, bladder wall, prostate, lungs, inflamed tissues, bone, cerebrospinal fluid, abscess fluid, and heart valves. Fosfomycin is well tolerated, with a low incidence of adverse events. Further randomized controlled trials are needed in order to evaluate the efficacy of intravenous fosfomycin for the management of nosocomial infections due to MDR pathogens