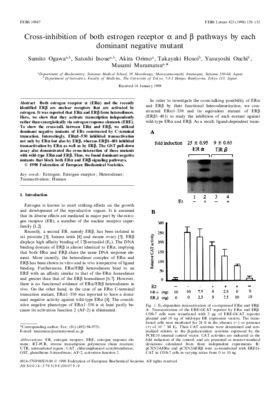 AbstractBoth estrogen receptor α (ERα) and the recently identified ERβ are nuclear receptors that are activated by estrogen. It was reported that ERα and ERβ form heterodimers. Here, we show that they activate transcription independently rather than synergistically via estrogen response elements (ERE). To show the cross-talk between ERα and ERβ, we utilized dominant negative mutants of ERs constructed by C-terminal truncation. Interestingly, ERα1–530 inhibited transactivation not only by ERα but also by ERβ, whereas ERβ1–481 inhibited transactivation by ERα as well as by ERβ. The GST pull-down assay also demonstrated the cross-interaction of these mutants with wild-type ERα and ERβ. Thus, we found dominant negative mutants that block both ERα and ERβ signaling pathways