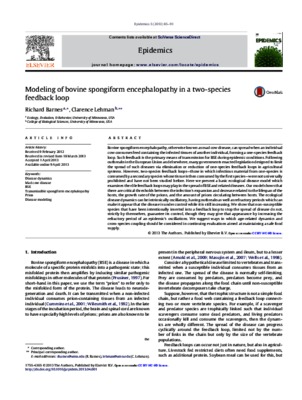 Modeling of bovine spongiform encephalopathy in a two-species feedback loop

By Richard Barnes and Clarence Lehman
Get PDF (502 KB)

AbstractBovine spongiform encephalopathy, otherwise known as mad cow disease, can spread when an individual cow consumes feed containing the infected tissues of another individual, forming a one-species feedback loop. Such feedback is the primary means of transmission for BSE during epidemic conditions. Following outbreaks in the European Union and elsewhere, many governments enacted legislation designed to limit the spread of such diseases via elimination or reduction of one-species feedback loops in agricultural systems. However, two-species feedback loops—those in which infectious material from one-species is consumed by a secondary species whose tissue is then consumed by the first species—were not universally prohibited and have not been studied before. Here we present a basic ecological disease model which examines the rôle feedback loops may play in the spread of BSE and related diseases. Our model shows that there are critical thresholds between the infection's expansion and decrease related to the lifespan of the hosts, the growth rate of the prions, and the amount of prions circulating between hosts. The ecological disease dynamics can be intrinsically oscillatory, having outbreaks as well as refractory periods which can make it appear that the disease is under control while it is still increasing. We show that non-susceptible species that have been intentionally inserted into a feedback loop to stop the spread of disease do not, strictly by themselves, guarantee its control, though they may give that appearance by increasing the refractory period of an epidemic's oscillations. We suggest ways in which age-related dynamics and cross-species coupling should be considered in continuing evaluations aimed at maintaining a safe food supply